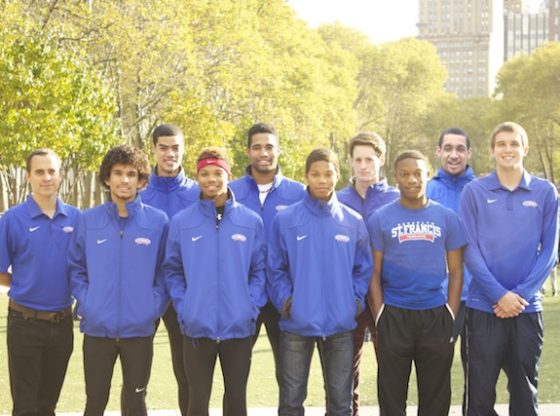 The Men’s Cross-Country team concluded their season at the NEC Championship on Nov. 2, 2013 in Loretto, Pennsylvania.

The meet was hosted by the Red Flash of St. Francis University at the Immergrun Golf Club.

The Terriers placed ninth out of nine teams, with Central Connecticut State capturing the top spot.

The top finisher for the Terriers was freshman Damian Duda.

Duda tackled the 8k course with tremendous power paving the way for the rest of the team. He ran a personal best in the meet, shaving thirty-two seconds off his previous time at the challenging course.

Duda has shown enormous potential for the Terriers, ever since the team was stricken with multiple injuries throughout the season. Duda placed forty-fourth in the race with a time of 30:57.

The next finishers for the Terriers consisted of Sophomore Jalon Wilson, freshmen twins Luther and Lamar Gillespie, and Junior Quesnel Senatus. These members were all first time competitors in an NEC cross-country championship race.

Wilson placed fifty-fifth with a time of 33:03. The Gillespie twins placed fifty seventh and fifty eighth consecutively with times of 34:05 and 34:23. Junior Quesnel Senatus ran a time of 35:51 placing fifty ninth.

For the men, it has been a season of many ups and downs, but the team worked together and accomplished what they could at the final meet. Senatus gave final thoughts on the team’s performance.

“Conference was definitely a hard course and very challenging to each of us. We were fortunate enough to have seen the course prior to the championship, even though it still lived up to its reputation as one of the hardest courses in the country. We all competed as hard as we could, and put in a good effort for being first time cross country runners.”

The Men’s Cross-Country team will be training the next few weeks in preparation for the indoor track season. The season will begin the week of Dec. 8, 2013.