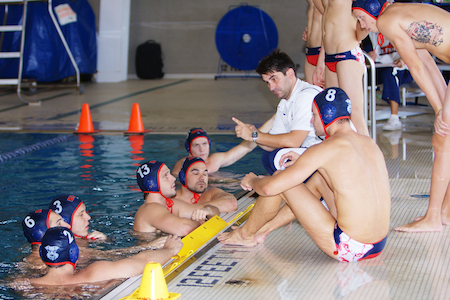 Despite a slow start to the season, the St. Francis College Men’s Water Polo team is turning it around en route to this year’s Final Four.

With 15 returning players and five new recruits, the SFC Terriers are adjusting to one another as they try to build team unity.

Assistant Coach Nikola Djuric said: “It is the beginning of the season and we have five new players, we just have to learn how to play together again and push it through.”

The preparation for this season has been harder than ever in order to defend their 2010 Eastern Championship this year and to continue their path to the 2011 NCAA Final Four.

Djuric said: “The pre-season was tough. Two-day practices everyday, a minimum of two and a half hours each practice was necessary in order to be ready for what’s to come.”

Seniors Alexandar Pantic and Filip Sasic, along with Sophomore Igor Mladenovic are looking to help lead this year’s team another championship.

Newcomers, Balint Toth (Hungary), Vuk Vujosevic (Serbia), David Lonnberg (Sweden), Aleksandar Jakovljevic (Serbia), and Luka Raic (Croatia) want to make a name for themselves as they enter the season with hard effort and a positive attitude.

This Wednesday October 5th, the Terriers will host their first home game at the SFC pool in a conference match against the Iona College Gaels at 7 pm.