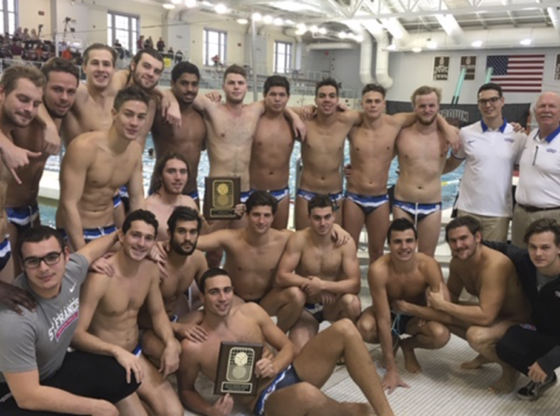 St. Francis College (SFC) Men’s Water Polo concluded their season this past weekend at the NWPC Championship which was contested at Brown University in Providence, Rhode Island.

The Terriers first faced off against the Princeton Tigers on Saturday November 17th in the semi finals match. The team fell to the tigers 9-7 after Princeton outscored SFC 3-1 in the final quarter.

In their final game of the season the Terriers knocked of Brown University 13-9 after outscoring the Bears in the final eight minutes of the game 7-1.

Now at the rearview of another season of Men’s Water Polo at SFC, SFC Today got the chance to talk to defenseman/goalie Benedeck Molnar.

Molnar spoke about his experience being on the SFC  Men’s Water Polo team, how he’s personally viewed the 18-19 campaign, and what he’ll take away from his first season as a Terrier.

It was a bit of a dismal start to the season for the water polo team starting on the road, as they started the year off on the losing end of a 11-6 loss to Pepperdine. In Fact, the Terriers actually didn’t pick up their first win of the season until their Home-Opener on September 26th against The Iona Gaels taking the match ( 17-7 ) ; after beginning the year with an 0-8 start.

In a season where it felt nothing short of setbacks, Molnar felt it was important for the group to stay united as one & stay focused.

“We had many injuries at the beginning of the season. So we definitely started our season worse than our plan was, it was disappointing for me. I think we had no victories until our home games. Then the injured players came back and beat every team from our conference so far but Harvard. We are second in our conference and the whole team is really positive again before the championship”.

Molnar looked back at some of the highlight wins of the year for SFC being the regular-season sweep of Iona , both away and at home in what has felt like a bit of a rivalry at times these past couple seasons.

“In the last two years we always had a tight game with Iona College at their home field. Iona’s pool is really small and one of the sides of the pool is shallow. Also, their cages are unusual than we got used to.

“We started very hard in the first two quarters and made sure they wouldn’t surprise us this time, even though the final score doesn’t show the huge differences between the two teams.”

One of the pivotal moments this season for The Terriers was the West-Coast Trip, which saw them go up against opponents such as Loyola Marymount University, Santa Clara, Fresno Pacific & San Jose State. Our Terriers managed to salvage  one win against San Jose State going (1-3) overall on the road trip.

Molnar saw a few bright spots in his team overall through the disappointing road trip which he believes helped lead to wins a week later against Ivy League Conference Opponents Brown & MIT.

“We played 4 games in CA. We played against beatable teams such as Loyola Marymount University, Santa Clara, Fresno Pacific and San Jose State University. Unfortunately we only beat San Jose State but all of the other games were tight and tough. I am not satisfied with our result in the West Coast but it definitely gave us confident in order to beat MIT and Brown in a week after”.

Throughout the Season, Benedek has pushed himself hard & had his own set of accolades and goals he desired to accomplish before seasons end.

“On one hand as a goalie my purpose is always get as less goal as I can over 4 quarters. On the other hand I want to win our conference and lead my team as far as I can in our season. I think it is truly achievable. I am looking forward the following 3 weeks and see how is it going to end up.”

SFC wrapped up their 2018-19 season with an 8-14 record as SFC dropped the season finale game with a 14-8 loss at Princeton . The Terriers shouldn’t hang their heads, as their conference play record speaks otherwise as SFC finished with a 7-3 record giving Molnar and the group a lot to be proud .

When asked what gives the Terriers an edge over other teams Molnar put emphasis on one word, Unity; “We only have 5 Americans in our team but 2 of them have international background as well as rest of the players who are all foreign. It is sometimes hard to bring people from different cultures on the same page. Our motto is diversity throughout unity”