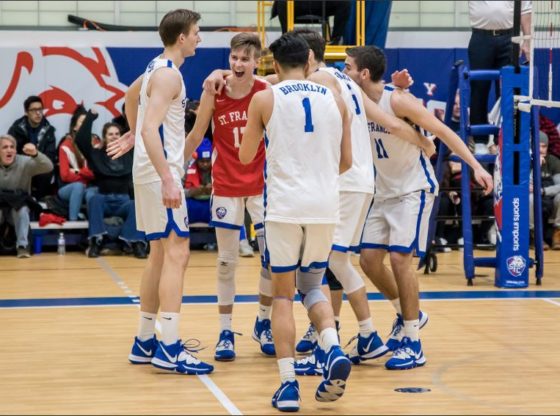 Saturday afternoon inside the Genovesi Center, the St. Francis Brooklyn Terriers (1-1) defeated the Baruch College Bearcats (0-1) in three straight sets in their home opener to record their first ‘W’ in program history.

In the third set, both teams fought vigorously for the win, but the Terriers prevailed as they limited the Bearcats to 18 points. The Terriers on a 12-6 run would not only distance themselves but take the set, 25-18.

For the Terriers, freshman opposite hitter David Vorfi led his team with 15 points. He also finished with 13 kills, one assist, five digs, and two aces.

The Terriers will be back in action on Saturday, January 25, at Chicopee, Massachusetts as they take on ELMS College Blazers. Game starts at 4 p.m.

Men on a Mission Defeated in the Battle Against LIU Sharks 66-69.
﻿Women’s Basketball Defeated by Wagner 66-74