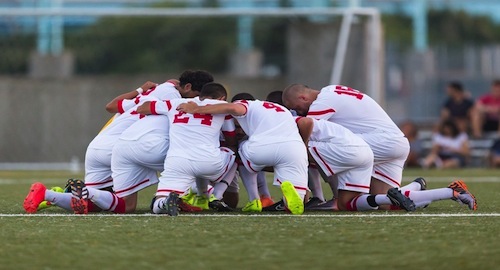 The St. Francis College men’s soccer team will battle it out with rivals LIU Brooklyn this Sunday as they close out their regular season.

The Terriers and Blackbirds have already clinched the playoffs but this weekend’s match-up decides the NEC playoff seeding.

LIU Brooklyn and St. Francis have not made the Northeast Conference Men’s Soccer Tournament at the same time since 1997, and this season LIU secured the playoffs for the first time in ten years.

Last year the Terriers knocked the Blackbirds out of an NEC playoff spot with a stifling 4-0 victory, assisted by the greatly missed forward Kevin Correa. With his superb play, Correa helped his team capture their first conference title since 1998.

Correa might be gone, but SFC has put forth a great season offensively and defensively. They are (8-5-4) overall and (3-1-2) in conference play, and hope to win the championships once again.

The Terriers, who are roughly a young squad, kicked off the season a little rocky with four consecutive losses but then went on an eight game streak with six wins and two ties.

SFC’s men’s soccer team has not lost a match since playing Saint Francis University, who happens to be the conference leaders.

As of now, LIU Brooklyn and St. Francis College hold the last two seats in the four-team draw, holding third and fourth respectfully. A win for LIU can put them in second place, knocking Bryant University to third if they lose their next match. If the Terriers win tomorrow’s matchup, they will stay tied with LIU in the number three seed.

The Blackbirds, who are (5-10) overall and (4-2) in the NEC, were picked last in conference play due to their strong efforts and last victory. They closed out their last home game of the regular season against Sacred Heart, 3-1.

Senior forward Brice Merwine had his fourth double goal game of the season, so the Terriers need to keep a close eye on him and put on a powerful defensive performance.

Offensively, Terrier’s junior forward/midfielder John Makaya leads his team with seven goals on the season. With his immense speed and ball handling, Makaya has been a key player demonstrating his strength and talent, especially showing off with his amazing bicycle kick.

Freshman midfielder Vincent Bezecourt has been another big help to his team, with a total of six assists.

Binks has the lowest goals against average in the conference with a total of seven shutouts this season.

The Terriers have only lost one home game; therefore they have won both their home conference games and plan on concluding their regular season with another home victory.

LIU and SFC will face off in their regular season finale tomorrow at 1 pm at Brooklyn Bridge Park’s Pier 5.