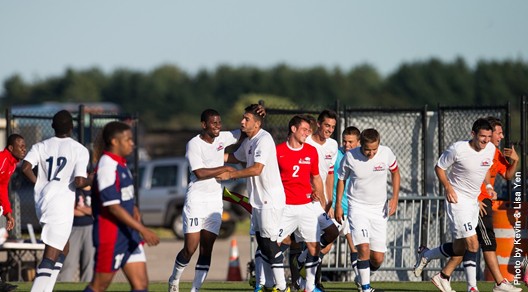 The Terriers are now 8-3-1 overall and 2-1-0 in NEC play. They are within one point of St. Francis University for highest ranking in NEC.

Cyril Coisne scored his first goal of the season in the 16th minute, leaving the Terriers up 1-0. John Johansson got the assist from the corner kick.

The Terriers were issued a yellow card when Ricardo Milano hit into RMU’s Neco Brett.

The Colonials were issued a yellow card to Devon Williams.

Johansson and Clement Gjushi collided and Johansson was on the floor for a while. He was surrounded by the coaching staff and the athletic trainer. He was replaced by freshman Fabian Suele and did not play the rest of the game.

At the end of the first half, the Terriers were leading 1-0.

Kevin Correa scored his 7th goal of the season and broke the tie. Thanks to the assist by James Caicedo, the Terriers led 2-1.

Bruce Cullen of RMU scored his second goal of the season and tied the game 2-2.

Yellow card was issued to the Terriers Larry Lopez after tripping Cullen.

The Terriers headed into their first overtime with the score still tied 2-2.

Correa scored his eighth goal of the year and won the game for the Terriers 3-2.

The Terriers are back in action against Central Connecticut State on Friday, Oct. 25, 2013 at 7 p.m.
< Prev