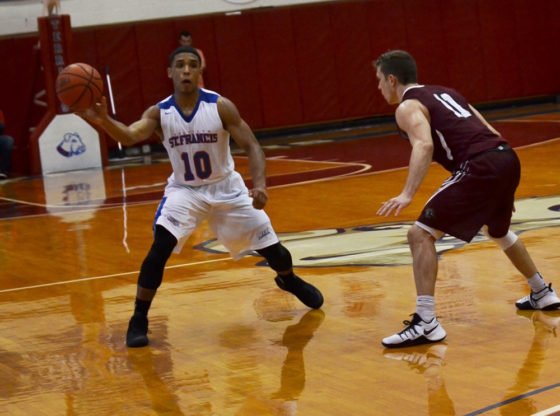 After leading by a game-high 13-point margin early in the first half Monday night, the St. Francis Brooklyn Terriers men’s basketball team started to fall behind as the halftime buzzer approached and had to fight for points in the second half. The Lafayette College Leopards left Brooklyn with a 74-72 win.

After the Terriers took a 22-9 lead with 10:21 remaining in the first half, the Leopards sped up their scoring and improved their defense for the next few minutes. After the teams were tied 26-26 with 4:05 to go in the half, Leopards junior forward Matt Klinewski broke the tie with a free throw.

“The defense slipped at the end of the first half,” Head Coach Glenn Braica said in a post-game interview. “We were in foul trouble, but I thought the transition defense really got them [the Leopards] back in the game.”

The Leopards led the Terriers 38-35 at halftime.

The Terriers surpassed their opponent in scoring twice during the second half, but only by a maximum of three points.

Braica explained that his team – which is made up of mostly sophomores – has to experience a number of losses to gain experience.

“They’re all young, they have no experience and you’ve got to go through some of this stuff,” Braica told SFC Today.

Terriers senior guard Yunus Hopkinson made a three-pointer in the last three seconds to bring his team two points behind the visitors, but a foul by sophomore forward Keon Williams put the opponent at the free throw line in the last second of the game.

While the two guards are expected to carry the team, Braica would like to see them taking better shots and wants the other players to get more involved.

“We still have to play as a team,” the coach said. “We do need them to get the majority of the shots, but we need them to take good ones.”

The Terriers will host the (1-4) Mount Saint Vincent Dolphins Wednesday night. The teams will tip off in SFC’s Generoso Pope Athletic Complex at 7:30 pm.