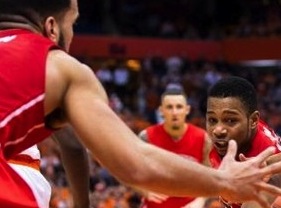 Jalen Cannon did not disappoint his audience who expect double doubles only falling two rebounds short of a double recording 16 points and 8 rebounds.

The Terriers bench showed exactly what they’re capable of outscoring the starting unit 45 to their 38 led by Martin as well as Guard Yunus Hopkinson who converted 3 shots from behind the arc for nine points and forward Amdy Fall, a presence inside and out on both ends on the floor recording nine points 6 rebounds and 1 block.

The Terriers enjoyed an all-around effort from every player on their roster which explains their offensive explosion this evening, but the main focus from the Terriers coaching staff inside the huddles was the emphasis that Head Coach Glenn Braica expressed on the defensive end.

Late in the first half Braica expressed his displeasure with the Terriers effort on the defensive end due to the success that St. Vincent was enjoying inside.

He stressed physicality and standing their ground which resulted in the Terriers allowing half the points that St. Vincent closed the half with surrendering 36 points at halftime and increasing their defensive pressure in the second half allowing only 18.

The Terrier’s next home game is on Dec. 10 in the Pope Physical Education Center at 7 p.m.