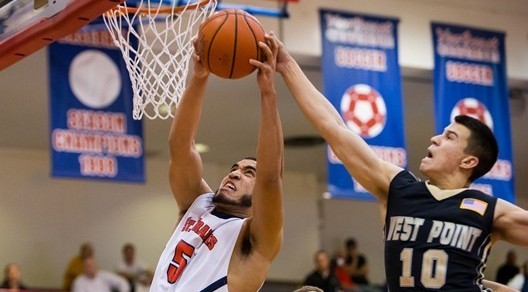 Men’s Basketball: The Terriers look to make it four in a row and gain ground on first place Robert Morris with a win this afternoon.

After blowing out the St. Francis U Red Flash on Thursday night, the Terriers will jump right back into action this afternoon when they take on the first place Robert Morris Colonials.

This game will be huge for both teams as it will have a direct impact on the conference standings. This is a golden opportunity for the Terriers to gain ground on first place Robert Morris.With a victory they can gain a full game in the standings which would be crucial since they sit in third place, two games behind Robert Morris.

The Terriers come into this matchup riding a three game winning streak and are playing some of their best ball of the season. This seems to be the perfect time for them to take on another top conference opponent. It seems like everything is starting to click for the Terriers, players are stepping up and getting the job done.

Recently it has been someone new every night emerging for the Terriers. Junior forward Jalen Cannon and Senior guard Ben Mockford have been doing it all season long, but lately we have seen the development of the rest of this basketball team. Junior guard Brent Jones has been on a tear of late.

Freshman forward Wayne Martin had an unbelievable game against Wagner where he scored 17 points grabbed 9 rebounds and blocked 7 shots. Not to mention he also hit the game winning layup for the Terriers with 24 seconds to go in overtime.

Freshman guard Sheldon Hagigal may have one upped him on Thursday night by putting the entire team on his back in the first half of their game against the Red Flash. No one could get anything going at all for the Terriers, but Hagigal had the magic touch as soon as he graced the floor. He finished the game tying his career high with 23 points on 9-11 shooting.

Not only will the Terriers need all these guys to play to a high level this afternoon, but they will need a shade of this production going down the stretch. There are seven games remaining including today’s, so there is a lot of basketball to be played, but if they Terriers can get production from all of these guys they certainly will be a scary team to face in the month of March.

Today’s game will mark the first meeting of the season between the two teams. Robert Morris comes into the game with a (13-11, 8-1 NEC) record. They struggled out of the gates early this season, but once conference play began they have handled their business.

The Colonials are led by Senior guard Karvel Anderson. Anderson is the team’s leading scorer, averaging 19.1 points per game. He is a sharp shooter, this guy can shoot the ball from anywhere on the court. The Terriers must blanket him at all times, they can not let him get any good looks because he will burn them. He is shooting 47% from three, that is an amazing stat right there, whoever guards him will have their hands full.

Another key players for the Colonials is Junior guard/forward Lucky Jones. Jones comes into today’s game averaging 13.9 points per game and is grabbing 6.5 rebounds per game.

A win today for the Terriers would be huge. They need this game if they want to have any chance of finishing first in the NEC. This is shaping up to be a heavyweight fight between two of the top teams in the conference, but only one will come out victorious.