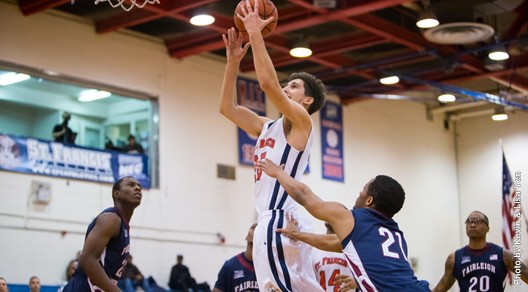 This finish qualified the Terriers with the sixth seed in the Northeast Conference Tournament where they lost to the Robert Morris Colonials in the opening round.

This season Head Coach Glenn Braica has the same goal as always.

He said, “I want to win the league. I want guys to act the right way, graduate, and be good people. These are my goals every year.”

This year, SFBK is returning four starters from last year.

Another starter returning for the Terriers is senior guard Ben Mockford, who averaged 11.1 points per game.

He finished third in the NEC last season in three point percentage, shooting 39.8%.

Junior Kevin Douglas, who missed the majority of last season due to a broken wrist, also returns for SFBK.

Douglas started 14 contest and averaged 7.4 points per game and 3.4 rebounds per game.

The Terriers are also returning some key players.

Each made contributions off the bench last season.

Coach Braica likes what he sees so far from his team. “We have a good mix of veterans and new guys. This year our new guys kind of spiced it up a little bit.

“They are tough kids, and they have brought a lot of completion in practice,” the fourth year head coach said.

This game will be aired on ESPN 3.