MEN’S BASKETBALL HOLDS ON AGAINST OAKLAND 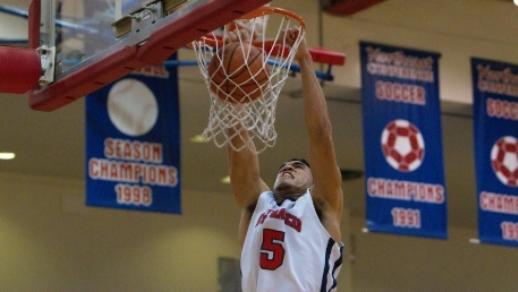 Jalen Cannon’s, who had a career high 22 points and nine rebounds, layup with 33 seconds left in the second half gave the Terriers lead for good in the victory.

“We rebounded and guarded them well the whole game,” Cannon commented. “We kept our composer and we ran play that I ended up going to the offensive glass went up with I and was able to get the ball in and a foul.”

Brent Jones picked up his first career double, 11 points and 10 assists, the win.

Oakland started the game on an 8-3 run. With the score 12-9,the Terriers went on an 11-0 run to gain the lead.
Later in the half, Cannon hit a layup to give SFBK their biggest lead of the game of twelve,29-17.

Oakland senior Travis Bader, who led all scorers with 30 points, hit a three to make it 29-20.

The Golden Grizzles started the second half on a 7-0 run to cut the Terrier lead to two, 29-27.

Oakland would cut it to one,32-31,when Kahlil Felder hit a layup.

But the Terriers outscored Oakland 8-2 in the final 1:45 to secure the victory.

SFBK broke their three game losing streak in the win.

The Terriers return home on November 27,2013 at 2:00 p.m., when they host the Mount St. Vincent Dolphins at the Pope Physical Education Center.