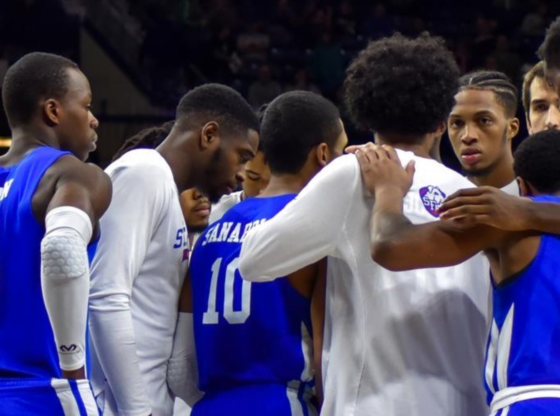 St. Francis College men’s basketball team goes away to LIU Blackbirds this Thursday at 8pm in the second to last game this regular season.

A win at LIU would secure Terriers home court advantage for a first round playoff game on Wednesday, February 28 at 7pm.

The LIU game will be broadcast live on ESPN3.

The last game of the regular season will be away to Central Connecticut Blue Devils on Saturday.

St. Francis Brooklyn is in a three-way tie for second place behind regular season champions Wagner.

The NEC said Jordan’s third rookie honor comes after averaging 15.0 points on 57.1 percent shooting from the floor, 50.0 percent accuracy from three-point territory and a 90.9 percent mark from the stripe in a pair of wins that left the Terriers tied for second place in the league standings.

Jordan did not turn the ball over in 49 minutes of action and pulled down 2.5 rebounds per outing.

In the recent home game with LIU, Jordan hit 6-10 from the field and finished with 20 points, five rebounds and two assists in the Terriers’ 84-79 victory.

Jordan added 10 points, including 2-3 shots from distance, in Saturday’s 87-74 triumph over FDU.

Writing Minor at SFC: What You Need To Know
Men’s tennis heads into McCarren double header