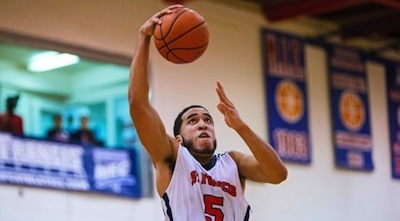 “Obviously, we didn’t play great. But I give Robert Morris Credit they did a great job. They played very good defense in a zone, they made some very difficult shots, and they out fought us to lose balls and rebounds,” St. Francis Head Coach Glenn Braica commented.

The Colonials started the game off outscoring the Terriers 11-4, on 11 points from Lucky Jones.

“Lucky was able to get us off to a great start. We were able to keep our momentum from there,” RMU Head Coach Andy Toole said.

Lowell Ulmer was able to get the Colonial lead down to ten on a three point play. But Jones, who led all scorers with 18, answered to extend the Colonial advantage to 12.
The Terriers were able to cut the lead to 10 once more but RMU answered right back and took a 39-26 lead going into the half.

The Colonial’s defense held the Terriers to 33.3% for the field in the second half. Their defense and ability to create and make shots on the offense made it hard for the shorthanded Terriers to come back.

SFBK returns to action on Thursday when they host Central Connecticut State University, tip-off against the Blue Devils is scheduled for 7:00 p.m.