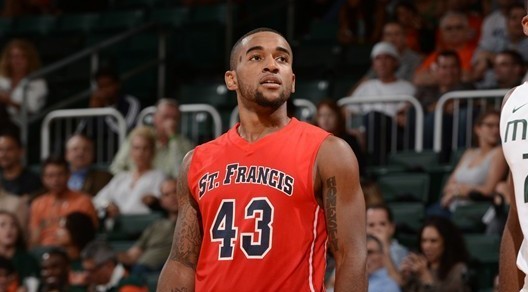 A top performer for the Terriers was Brent Jones. He gave the Terriers six points, two rebounds, eight assists and one steal. He was three-for-three from the field.

Sheldon Hagigal lead the Terriers with 15 points, four rebounds, three assists and two steals. Behind Hagigal was Amdy Fall. Fall had 11 points and four rebounds. These two newcomers are proving to be an asset to the Terriers during crunch time.

Jalen Cannon had a game high ten rebounds, as well as eight points, one assist and one steal.

Leading the Griffs was Billy Baron with 11 points, six defensive rebounds, four assists and one steal.

A top performer for the Grifs was Chris Manhertz. He had nine points, five rebounds and one assist.

The Terriers will be back in action on Dec. 19, 2013 against Lafayette College at 7 p.m. in the Pope Physical Education Center.

The Terriers lead the Golden Griffins 35-32 at the end of the first half. Both teams have been playing at an equal intensity, but the Terriers have out-scored the Grifs from the field, 50% to 38%.

Leading the Terriers with eight points is Cannon. He adds another two rebounds and a steal.

Hagigal has six points so far. This isn’t a surprise, due to the fact that he has been scoring an average of 7.4 points per game. In the game against the Monmouth Hawks, Hagigal scored over 20 points.

Hagigal has become the starting point guard for the Terriers, which leaves returning point guard, Brent Jones on the bench. During his playing time today, Jones had seven assists and two points.

Leading the Golden Griffins with seven points is Chris Manhertz.