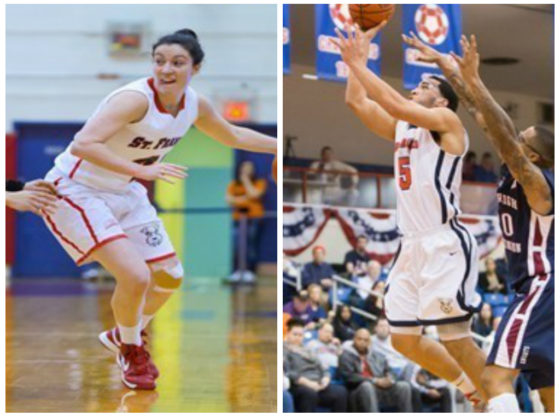 The second annual Northeast Conference Social Media Day for Men’s and Women’s basketball was held on October 22, 2013 at the Barclays Center in Brooklyn, New York.

On the men’s side, the Wagner Seahawks were the pre-season favorite to win the league. The Terriers, who finished sixth last season, were picked to finish seventh this season.

This year SFBK, who finished 12-18,8-10 in NEC play last season, are bringing back four of five starters from last season.

Head Coach Glenn Braicca, who is entering his fourth year at SFBK, likes the team he has this season. “We have a good mix of veterans and new guys. This year, our new guys kind of spiced it up a little bit. They are tough kids, and they have brought a lot of completion in practice.”

This season Braicca has his eyes set on an NEC Title, and hopes the team will grow on and off of the court. “I want to win the league. I want guys to act the right way, graduate, and be good people. These are my goals every year.”

Braicca spoke highly of Cannon. He said, “He is a very good player. He is a good rebounder, he has become a very good inside scorer and he is working on his shot. He plays with a feel that you can’t teach.”

On the women’s side, the Robert Morris Colonial were the pre-season favorite and the Terriers were picked to finish sixth.

SFBK second year Head Coach, John Thurston said he had the same goals for his team every year.

“We try to constantly focus on getting better. If you focus on the simple things, execution and effort every single day, I do not believe you can focus on the big picture. You have to take it day by day, practice by practice, drill by drill, and that way you get better.”

Last season the Terriers 11-19, 8-10 in NEC play, which gave them their first NEC Tournament berth in five years.

“We had a season that showed us that we can be pretty good,” Coach Thurston said. “We talked a lot about the 10 games that we lost by four points or less. We are excited that we have veteran players, who have been there, and have gotten a taste of it, which makes things so much easier.”

This season the Terriers are returning most of the core from last year’s team that made great strides to improve the program.