Home /News, Sports/Men on a Mission Edged in the Last Second of Play Against SFU ﻿ 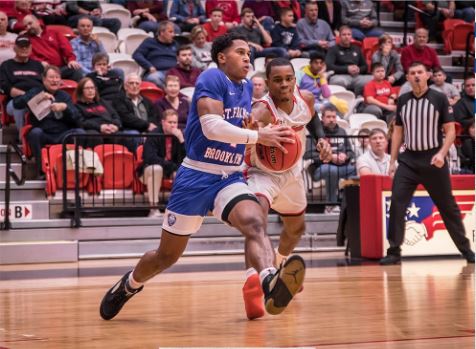 Entering the second half, the Red Flash continued with the same energy expressed in the first half as they added to their lead taking it into double figures in the third minute of play, 48-58. Working their way back, the Terriers equalized in the last two minutes, 76-76.

Fighting to take the win, both teams played with more energy and power. With five seconds on the clock, Chauncey Hawkins landed a perfect two shots at the free-throw line to take the score to 80-79 in favor of the Terriers. Randall Gaskins, not giving up hope, ran through the Terriers defense scoring a buzzer-beater, taking the win for the Red Flash 80-81.

Senior guard Keith Braxton finished with 13 points in 32 minutes. He also finished with eight rebounds, one assist, and one steal.

Junior guard Ramiir Dixon-Conover finished with 10 points in 21 minutes. She also finished with two rebounds, two assists, one steal, and landed a perfect two shots at the free-throw line.

For the Terriers, junior guard Chauncey Hawkins led his team with 16 points in 27 minutes. He also finished with four rebounds, five assists, two steals, and landed a perfect six free-throws.

Freshman guard Rob Higgins finished with 14 points in 29 minutes. He also finished with two rebounds, one steal, and landed perfect five shots at the free-throw line.

The Terriers will be back on the court on Wednesday, January 15, at the Pope Physical Education Center, Brooklyn Heights, NY, as they host the Long Island Sharks (LIU) Sharks. This game will be streamed live on SNY. Game tips off at 7 p.m.