Men on a Mission defeats Hartford (3-5) 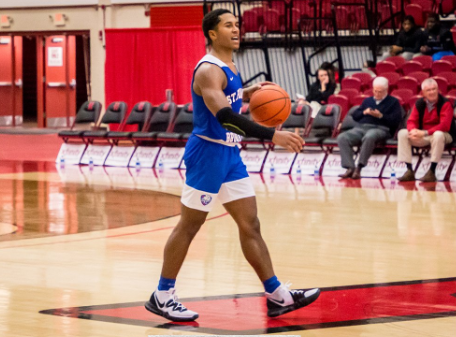 It was a close game between the St. Francis Brooklyn Terriers and the Hartford Hawks earlier this evening at West Hartford, CT. The Terriers defeated the Hawks 84-78 to record their third win of the season.

Early in the first half the Terriers and the Hawks were head-to-head, but the Hawks got ahead in an 8-2 run. They took a 13-point lead (21-34) with one minute and 50 seconds on the clock (their highest of the contest) but the Terriers closed the gap to 28-36 with a 7-2 run at half time.

In the second half, the Terriers began with a 7-0 run. With 12 minutes on the clock, Stevan Krtinic, with a three-point shot gave the Terriers their first lead of contest. They would go on to take a nine-point lead (their largest lead score for the contest) with three minutes remaining but when the clock was down to two minutes Freshman Moses Flowers of the Hawks threatened their standing as he recorded 14 points.In the end, the Terriers took the game 84-78.

Freshman guard Moses Flowers acted as the Hawks powerhouse as he totaled a game-high of 28 points in his 25 minutes of play. He scored 14 points within the last two minutes. Flowers also finished with six rebounds, two assists, and two steals.

For the Terriers, junior guard Chauncey Hawkins led his team with a high of 23 points in 36 minutes. He also recorded two rebounds, four assists, three steals and landed seven of nine shots at the free-throw line.

Senior forward Deniz Celen recorded his first double-double for the season in 22 minutes with 14 points and 10 rebounds.

The Terriers will be back in action on Saturday, December 7, at the Costello Athletic Center in Lowell, MA as they face the Umass Lowell River Hawks. Game tips off at 1 p.m.