Men on a Mission defeated by Sacred Heart 76-83

Home /News, Sports/Men on a Mission defeated by Sacred Heart 76-83 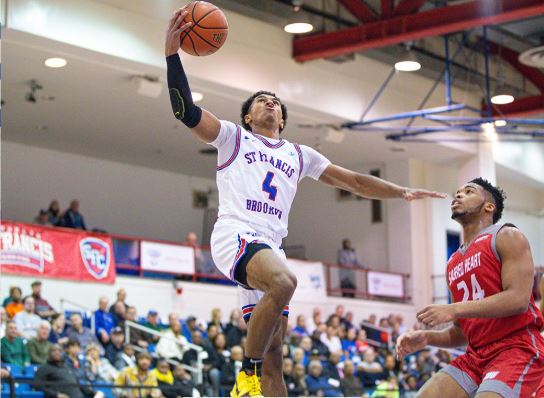 Saturday afternoon inside the Pope Physical Education Center, the St. Francis Brooklyn Terriers (10-12, 4-6) fell to the Sacred Heart Pioneers (14-9, 7-3) by a score of 76-83. The Terriers are currently in eighth position while the Pioneers are third in the NEC.

The contest started with the Terriers having a 3-0 deficit. However working their way back they would soon take the lead on a 10-3 run, 10-6. The Terriers maintained their lead through most of the first half but within the last six minutes, the Pioneers went on a 14-0 run bringing the score to 27-34. They would go on to take the first half 34-42.

Sophomore guard Koreem Ozier led his team with 18 points in 31 minutes. He grabbed four rebounds, assisted in one basket, recorded one steal, scored three of five three-pointers, and landed three perfect shots at the free-throw line.

Senior forward Deniz Celen led his team with 17 points in 21 minutes. He grabbed three rebounds, assisted in two baskets, recorded one steal, and landed four perfect shots at the free-throw line. At 3:37 in the second half, Celen was fouled out as he recorded his fifth personal foul.

Coming off the bench, senior forward Milija Cosic finished with a career high of 13 points in 26 minutes. He recorded four rebounds and scored three of four free-throws.

Junior guard Chauncey Hawkins finished with 12 points in 40 minutes. He grabbed five rebounds, assisted in seven baskets, recorded one steal, and one block.

The Terriers will be back in action on Thursday, February 6, as they take on the Bryant Bulldogs at Smithfield Rhode Island. Game tips off at 7 p.m.