Men on a Mission collapsed in 2nd half against the Warriors

Home /News, Sports/Men on a Mission collapsed in 2nd half against the Warriors 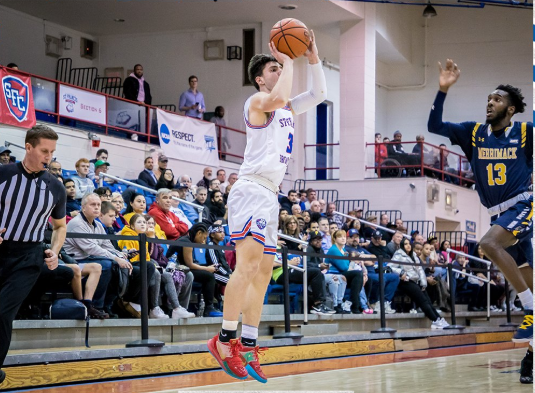 Thursday evening inside the Pope Physical Education Center, the St. Francis Brooklyn Men’s Basketball Team (11-14, 5-8) were defeated by the Merrimack College Warriors (17-9, 11-2) by a score of 50-60. The Terriers missed their opportunity to beat the number one team in the NEC as they led 34-30 at halftime. However, they collapsed in the second half as they were outscored by the Warriors.

The Terriers still holds eighth place in the NEC. However, they must maintain this position or raise their standing within their remaining five games to move on to the NEC Tournament playoffs.

Entering the second half, the Terriers extended their lead to 38-30. The Warriors would then set out on a 26-4 run in which they would not only take the lead but a double-digit lead, 42-56. In attempts to come back, the Terriers would go on an 8-2 run to cut the lead to 50-58 however Devin Jensen would draw a foul which would send him to the free-throw line to shoot two. The Warriors took the contest 50-60.

Senior guard Jaleel Lord finished with 11 points in 37 minutes. He also finished with six rebounds, one steal, scored two of seven attempted three-pointers and scored one of four free-throws.

Graduate guard Unique McLean led his team with a double-double in 38 minutes. He recorded 15 points, 13 rebounds, two assists, one steal, and landed three perfect shots at the free-throw line.

Freshman guard Rob Higgins finished with 10 points in 36 minutes. He also assisted in three baskets and recorded one steal.

Junior forward Yaradyah Evans finished with four points in 15 minutes. He grabbed six rebounds, recorded one block and one steal, and landed two perfect shots at the free-throw line.

The Terriers will be back in action on Tuesday, February 18, as they take on the LIU Sharks in the Battle of Brooklyn in Brooklyn, New York. Game tips off at 5 p.m.