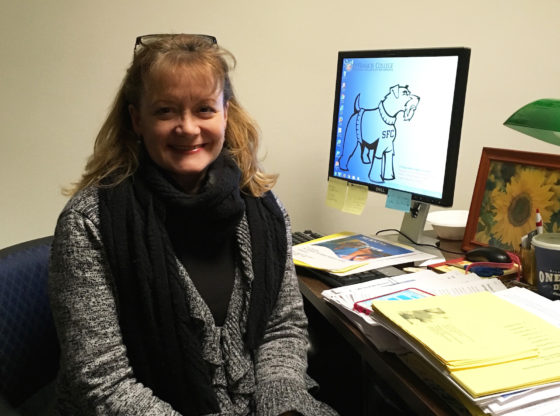 SFC’s new nurse Elizabeth Giugliano is welcoming students into her office with open arms and wants to make health a priority on campus.

Giugliano — who filled the position in December which had been vacant for years — did not always know she wanted to pursue a career in nursing. She originally graduated from Fairfield University with a degree in Business Management. Although she was always interested in health education, she followed a different dream — becoming a school teacher for 15 years.

“I always had a passion for helping others and learning about new health techniques,” Giugliano told SFC Today.

Before coming to St. Francis College, she had several jobs ranging from teaching elementary students basic education to being an ESL teacher. She received her Master’s in Education from Adelphi University.

After teaching for so long, she still retained an interest in health and decided to return to college for nursing — studying at the College of Mount Saint Vincent — and change career paths.

“I was very interested in health education and I thought nursing would be a profession that would allow me to address health issues and help people by spreading health awareness,” Giugliano said.

Giugliano encourages students to come to her office if they need assistance with anything. However, many students still don’t know about her since SFC hasn’t had a nurse in so long.

“At St. Francis, I am providing medical assistance to the students and staff,” Giugliano told SFC Today. “And my hope is to create a holistic and education health support system among the community”

Giugliano plans on redeveloping the health services and plans on going to various club meetings to discuss health ideas. She would love to eventually host a “health discussion” with students to discuss various concerns including nutrition, exercise or anything else students request.

Giugliano shared some health tips she thinks are important for students.

“Some tips of advice are to always eat breakfast, get enough sleep and always believe in yourself,” she said.

But her talents do not end in the nurse’s office. Outside of SFC, Giugliano has a passion for music and began taking guitar lessons in 2011. She currently goes to Brooklyn Guitar School and receives both guitar and vocal lessons.

For the past year and a half she has been the lead singer of a band called Melting Pot. The band practices for seven weeks, then does a performance on the eighth week.

Giugliano would love to combine her love for music with her nursing career. She plans on doing so by incorporating music therapy and hosting relaxation seminars during stressful midterm and final weeks.

Whether you need a Band-Aid or just someone to talk to, Giugliano is more than happy to help.

Her office is located in the Health Center on the second floor.