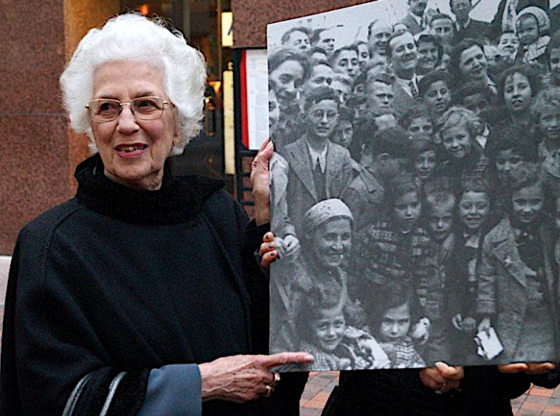 Sonja Maier Geismar, a native of Baden in Southwest Germany, was just four years old when discrimination laws were implemented in Germany.

She remembers Kristallnacht, a slaughter of over 90 Jewish citizens carried out by the Sturmabteilung Army in Nazi Germany across two days in November 1938.

Geismar restated the conflicts that European Jews were faced with during Hitler’s reign: “Do you leave or do you stay? And if you stay, at what point would you leave? And where would you go?”

She also noted that problems didn’t start and end in Europe. Anti-Semtiism was wide-spread; at the Summer of 1938’s Évian Conference, “only the Dominican Republic and Bolivia were willing to accept refugees.” The Nazis “justified their policies” using the “dismal” outcome of this international meeting.

The MS St. Louis’s brochure claimed that “it’s a ship in which one travels securely and lives in comfort.” Six months after Kristallnacht, Geismar and her family boarded the MS St. Louis on May 13th, 1939.

Alas, the Geismar family, along with over 930 other passengers, were denied entry to Cuba. A new law, Decree 937, “required written authorization from Cuba’s Secretaries of Labor and State plus a $500 bond for each person” for access.

The Captain, Gustav Schröder, vowed to not return the ship to Germany.

Of the hundreds of passengers, many were dispersed throughout Europe and the U.K. following their denied entry to Cuba. However, 254 former MS St. Louis passengers were forcibly taken and killed by Nazis in select countries during the Holocaust.

Following her voyage on the MS St. Louis, Geismar and her family found temporary refuge in England for eight months.

The Geismar family was then allowed access to immigrate to the United States soon after the war began.

Geismar recalled that her family “awoke early to glimpse the Statue of Liberty as we entered New York harbor” and deemed it “a sight I will never forget.”

The family moved to The Bronx where, “with the help of the Hebrew Immigrant Aid Society,” they rented their own apartment.

Geismar’s father took a job as a night watchman. However, one of Geismar’s funniest revelations was that he was fired shortly thereafter for falling asleep on the job. Geismar’s father later “started his own business as a personal shopper” and, after his death, his wife continued the family business until she died in 2003 at the age of 93.

Sonja Maier Geismar thanked the many people who helped Jews, including the countless “unsung heroes and diplomats” from Asia and South America that “issued visas to help immigrants escape from Europe.”

She stated that “it took the authors of Refuge Denied nearly 10 years to locate virtually all the passengers or their descendants” and that, through the efforts of a former passenger, “contacts were maintained and reunions were held.”

She revealed that she attended “an unforgettable and emotional four-day reunion to commemorate the 70th anniversary of the St. Louis with 33 other passengers and their guests.”

Sonja Maier Geismar currently lives in NYC and works as a librarian.

Geismar has a husband, Arnold, and said that they are “blessed with a wonderful family.”

Their daughter and son-in-law, Lisa and Aaron Leitner respectively, live in Israel with their three children. Geismar’s son and his wife, Lawrence and Stephanie respectively, have two children of their own named Ethan and Arielle.