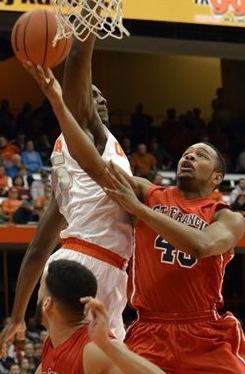 Freshman forward Wayne Martin has made an immediate impact on the St. Francis Brooklyn men’s basketball team this season.
Martin, who has been named Northeast Conference Rookie of the Week twice, is leading NEC freshman in: scoring (11.0), rebounding (5.9), and field goal percentage (.563).

“It feels good to be NEC rookie of the week so early in the season, but I don’t focus on things like that. I pay attention more to the game and helping my team. A momentarily title means nothing … it can change quickly,” says Martin.

“My high school coach motivated me by pushing me to do better because when I first started I wasn’t good and with their help, they made the player that I am today.”

The physical and aggressive aspects of the game caught Martin’s attention.

“Once I saw that I thought it would be perfect for me, it gives me a positive way to release energy without getting in trouble.”

Martin saw St. Francis as a fit because it was close to home in Brooklyn.

“I wanted to come to SFC because I’m right where I’m comfortable … at home where my mother and sister can come and watch me play. It was just where I wanted to be”.

This season Martin has the goal of winning the NEC.

“This season, I feel we can do big things this year if everybody plays up to their potential. My goal is the same as the rest of my teammates, which is to win the NEC Championship, and make history for SFC and it be the first time our school ever make the tournament.”

Watch Martin in action on the link below: