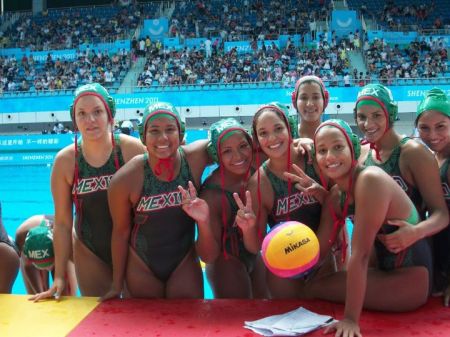 This summer I had the opportunity to represent my country, Mexico, in the 26th Universiade (University World Games) in Shenzhen, China in the discipline of water polo.

Over 100 countries and 28 collegiate disciplines gathered to celebrate the unification of five continents through sports competition under the slogan “Start here, Make a Difference.”

It has been by far the best experience of my life.

I had the chance to travel across the world and play water polo at an international and Olympic level.

Some of the athletes participating had either been at the Olympic Games or will participate in London 2012 next summer.

To see so many different countries in a single setting was amazing. In the dining hall the athletes wore their uniforms at all times.We would all exchange pins from our countries as souvenirs.

Competitors from Mexico, France, Italy, Saudi-Arabia, Australia, Macedonia, China, Ghana and Israel came together and we all became friends.

The months prior to China were rough. We practiced everyday for seven to eight hours a day only leaving the room to eat and sleep. I was ready to quit, leave my camp behind and go home.

It was the hardest I have ever worked in my entire life.

At practice, we had to do a set that I literally thought was going to result in a heart attack. After being in the water for almost two hours we were exhausted.

If the team didn’t complete it under the 1.08 minute mark, we would all have to repeat the whole routine.

I felt stressed. In my mind I had the idea that I was the slowest person on the team. Of course nobody wants to be the responsible for making everyone else start over.

The set started and throughout the whole thing I felt like I was going to die. Every single 100 I thought I was not going to make the next one.

I was hyperventilating and my arms felt like they were soon going to fall off. I did all of them. I learned that I am my own limit. I am the only one who can stop me from making my dreams come true.

Hard work and dedication got me to Shenzhen.

Every time I went in the water I gave it my all, until I got hurt. During our game against Canada, a girl accidentally poked my eye causing me to lose sight.

I was bleeding and I had to get stitches. I was not allowed to get back into the pool. At that moment I was very scared and really bummed out about not being able to play for the rest of the competition.

The next day, I met a Chinese woman at a souvenir store.

She was very kind and asked if she could put her hands on my head. After a few minutes she told me that everything would be better.

I couldn’t understand what was going on.

She then took a box out and gave me a spinning ring with Chinese letters.

The meaning behind the ring symbolized “turn of fortune.”

I can not worry about the things I can’t control. If I keep worrying about them I will never allow myself to enjoy life.

I had to turn the page and move on.

I was at every game sitting on the bench, cheering on my team and my country. In this wonderful experience I improved my water polo game but I also learned to see life differently.

I had the opportunity to meet amazing people from all over the world. I became very intrigued by the Chinese people and their way of life.

They were kind, warm-hearted people who did anything to help. They reminded me of little children and how they are so hungry to learn and grasp every little thing they can in order to grow.

This summer I have grown. I learned about myself and that I have no limits. I can achieve whatever I set my mind to and I know how hard I have to work to get there.