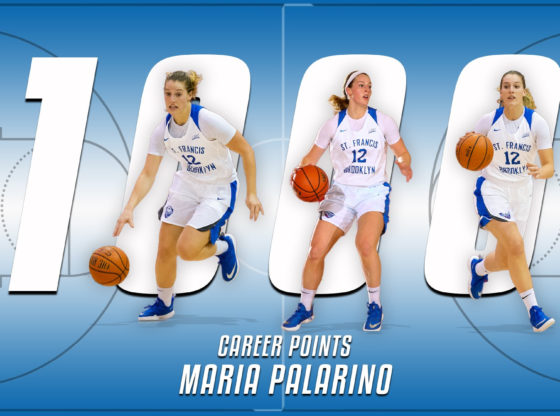 In a game today against Mount St. Mary’s University, Senior guard Maria Palarino on the St. Francis Women’s basketball team had scored her 1,000 career point as a Terrier.

The 1,000 career point was scored when Maria made a layup, assisted by Amy O’Niell, at the 3:06 mark in the second quarter.

Palarino began her career at St. Francis College back in 2015 and was an efficient scorer for the Women’s basketball team ever since. She averaged 8.6 points her freshman year, 10.5 points her sophomore year, 9.4 point her junior year, and is currently averaging 9.6 points in her senior year.

This is the second basketball player at St. Francis College to score their 1,000 career point this season as current men’s basketball star Glenn Sanabria surpassed that mark back on November 24th, 2018.

Despite tonight’s loss against Mount St. Mary’s, Maria was able to finish the game out strong as she ended with 16 points, along with 7 rebounds.

After tonight, Maria now joins 16 other players in SFC Women’s basketball history that have also scored at least 1,000 career points in their career as a Terrier.