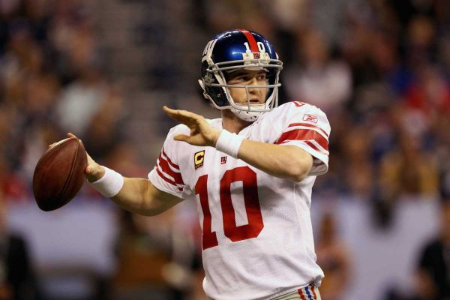 Eli Manning passed for 296 yards and Ahmad Bradshaw scored the go-ahead touchdown with 57 seconds left in the game as the New York Giants again knocked off the New England Patriots 21-17.

Manning won his second Super Bowl MVP award after the game following a night where he completed 30 of 40 passes and a touchdown. The quarterback was also named MVP of Super Bowl XLII, where New York also defeated the Patriots 17-14.

On the Patriots first offensive play, quarterback Tom Brady was penalized for intentional grounding in the end zone, which gave New York an early 2-0 lead.

New England continued to shoot themselves in the foot. With the Giants driving downfield on the following possession, New England was able to strip Victor Cruz on a third-and-three play only to have it nullified by a too many men on the field penalty.
New York retained the ball and extended their lead to 9-0 when Manning found Cruz in the end zone for a two-yard touchdown pass. Cruz, who finished third in the NFL in receiving yards, was consistently double-teamed by the Patriots defense and finished the game with just 25 yards on four receptions.

New England fought back in the second quarter and took a 10-9 lead at halftime when Brady connected with running back Danny Woodhead for a four-yard touchdown pass. The Patriots marched 98 yards up the field on that drive and Tom Brady was a perfect 10-for-10 on passing attempts.

Brady helped New England extend their lead to 17-9 with another touchdown pass, this time to tight end Aaron Hernandez.
New York’s pass rush had a surprisingly quiet night, only registering two sacks against Brady despite Jason Pierre-Paul, Osi Umenyiora and Justin Tuck combining for 30.5 sacks during the regular season. Though they were not able to take Brady down, they were still hitting him and Pierre-Paul was able to deflect two passes at the line of scrimmage.

Down 17-15 with just 3:46 left in the game, Manning engineered a game-winning drive that mirrored his performance in the previous Super Bowl. One the first play of the drive, wide receiver Mario Manningham caught a 38 yard pass in stride before stepping out of bounds, similar to the game-changing catch that David Tyree made in Super Bowl XLII. The catch was challenged by New England, but was upheld upon review. Manning continued to target Manningham, completing another pair of passes for 18 yards before Hakeem Nicks hauled in a 14 yard pass that put New York into the red zone.

Immediately after the timeout, Bradshaw found a hole in the middle of New England’s defense and ran in a six-yard touchdown. Unsure of whether to run the ball in for the score or take a knee to continue to burn the clock, Bradshaw literally fell into the end zone as he tried to take a knee.

New York then attempted a two-point conversion with an outside run by D.J. Ware, but was stopped by New England.

Brady was unable to spark any last-minute magic, throwing five incomplete passes and getting sacked by Tuck in the process.