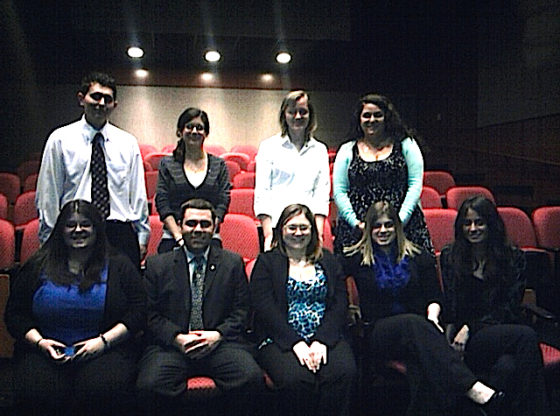 Lambda Pi Eta was founded in 1985 at the University of Arkansas. Lambda Pi Eta became a part of the National Communication Association in 1988, and the official honor society of the NCA in July 1995.

As an accredited member of the Association of College Honor Societies, Lambda Pi Eta has nearly 420 active chapters at colleges and universities worldwide.

The ceremony began at 7:00 pm, with the soon-to-be-members walking into the 7th floor theater and being seated in the first two rows.

The ceremony was introduced by Dr. Timothy Dugan, who gave a brief introduction for the guest speaker of the night, Dr. Richard Berleth.

Dr. Berleth gave a sincere and fun speech about the diverse Communications department as well as how it is growing and changing by the minute.

The three board members explained what the name Lambda Pi Eta meant with a candle-lighting ceremony explaining the Modes of Persuasion. The name bears the famous philosopher Aristotle and his ingredients for persuasion: Logos (Lambda) meaning logic, Pathos (Pi) relating to emotion, and Ethos (Eta) defined as character credibility and ethic.

The names of this year’s inductees were then called to the front of the stage. They received their certificate recognizing their membership and pins, which President Morisi pinned onto each new member.

President Morisi then introduced the new executive board for 2010-2011 by giving gifts that would symbolize their new positions on the executive board.

The new president, Steven Buscetta, was given a thick binder and numerous folders containing every past member of the honor society; the Vice President, Carolann Falotico, was given a full list of the new members; the Secretary, Tara Garone, was given a notebook; and the Treasurer, Christina Scotti, was given a calculator.

The ceremony ended with a bouquet of flowers presented to recruitment director, Alyssa Forrester for all of her hard work. The night was followed by numerous pictures being taken by friends and loved ones. The 2010-2011 Treasurer, Christina Scotti, was kind enough to make a cake shaped in the letters ‘L,’ ‘P,’ and ‘E’ – representing the initials of the honor society.

Great work to everyone who was inducted, and good luck to the new board of executives!

The new board of executivies in the back row: Steven Buscetta, Carolann Falotico, Tara Garone, and Christina Scotti; the 2009-2010 board of executives in the first row: Stef Morisi, Albert DiCostanzo, Jaclyn Mistretta, Jessica Majkowski, and Maria Papasthinasiou