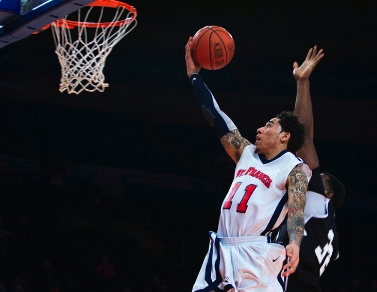 A traveling call against Akeem Johnson with 1.2 seconds left doomed St. Francis as they fell to LIU, 81-78 following a go-ahead layup by Julian Boyd for the Blackbirds.

Forward Jamal Olasewere scored a career-high 32 points, including a perfect 11-for-11 from the field while Boyd posted his second-consecutive double-double with 20 points and 10 rebounds.

The Terriers, however, would not be intimidated by the top-ranked team in the NEC as Travis Nichols powered St. Francis on a 13-4 run to give them back the lead. On the run, Nichols scored 10 of his 12 points.

With the game tied and just 44 seconds left, Olasewere fouled out trying to block a shot by Johnson. Johnson, however, was only able to knock in one of his two free throw attempts and on the following posession, LIU permanently took the lead when Boyd hit a jump shot with 18 seconds left.

“It’s a shot that I take all the time in practice,” said Boyd. “I thought it was going to come off of the left side of the rim, but I think God pushed it in.”

St. Francis continued their upset bid, but Johnson was called for traveling while driving to the basket in the final second of the game and the Terriers were forced to foul LIU.

“There was a bit of a miscommunication and I got hit with a travel,” said Johnson. “It was a tough call”

Senior Stefan Perunicic also made his presence felt, knocking down a pair of three pointers and recovering four rebounds.

Johnson had another monster game for St. Francis, narrowly missing out on a double-double with 23 points and 9 rebounds.

“I think we made some people take notice that these kids are good players,” said St. Francis head coach Glenn Braica. “It’s a good brand of basketball. Anyone who watched the game today on TV got their money’s worth.”

“We get 30 fouls shots every single game,” said LIU head coach Jim Ferry. “It’s not a fluke we do it every season.”

0:15 – Akeem Johnson hits one of two free throws then Julian Boyd comes down and makes a jumper to give the Blackbirds the lead, 79-78.

0:44 – Jamal Olasewere connects on the hard layup with the foul and ties the game at 77 apiece.

7:22 – At the official timeout, St. Francis trails 69-62 following the floater by Justin Newton.

13:10 – Brandon Thompson ties the game at 52 apiece after hitting a three-pointer.

First Half Recap:
St. Francis Terriers hold a close two-point lead at the half against the LIU Blackbirds, 43- 41 thanks to their 16 points off 11 LIU turnovers.

Akeem Johnson is the leading scorer at the half with 17 points, shooting 7-9 from the field and he made all three of his free throws. He also has three of the Terriers seven steals in the game.

Jamal Olasewere of the Blackbirds has a game-high 23 points on 8-8 shooting from the field and 6-7 from the charity stripe in just 13 minutes of play.