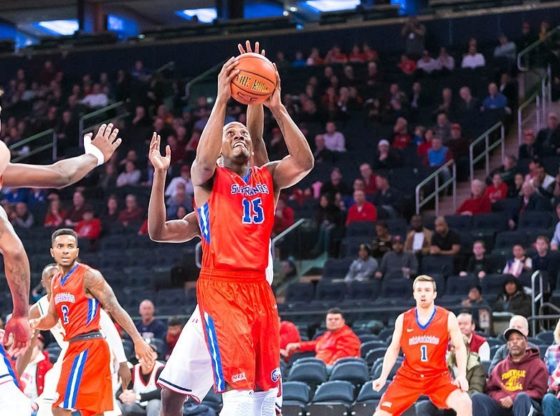 The LIU-Brooklyn Blackbirds evened the score by routing the St. Francis Terriers at The Pope, 82-67 in a President’s Day affair that was televised on ESPN U. With the victory, the Blackbirds improve to (13-12, 7-7 NEC), while the Terriers fall to (11-16, 7-7 NEC), and these leaves the Brooklyn rivals in a tie for sixth place in the conference.

This win for LIU comes weeks after the Terriers defeated LIU in the 2016 Battle of Brooklyn last month, 64-49.

Hermannsson, who entered with 21.2 points over his last five games, scored a game-high 19 points. Hermannsson also tied a team-high with seven rebounds, racked up five assists, and recorded a game-best five steals.

In the game’s first half, the Terriers got off to an eerily similar start as their eventual come-from-behind win over Central Connecticut State on Thursday.

The Blackbirds got off to a very efficient start on both ends, creating and converting on many open looks offensively, and locking-in defensively.

An early 13-4 lead for the Blackbirds came with 4:29 left to play in the first half. The Terriers then quickly inched closer with five unanswered before the Blackbirds responded with five straight points of their own, leading 18-9 with 10:57 to go.

The Blackbirds were able to attain their first double-digit lead of the game, 21-11 within the next 45 seconds, and from that point on they controlled the action. At halftime, the Blackbirds led 39-27, and looked poised to earn their payback against the Terriers.

In the second half, the Terriers were unable to get the big run needed to come all the way back, and the Blackbirds maintained their lead and efficient play, coasting to an 82-67 win.

“It’s disappointing, but it’s understandable given the way we’ve played, we’ve slipped a little bit,” Braica said. “We have to maintain focus, and we have to get better in different ways without necessarily having as many practices as we’d like.”

In the loss, the Terriers were led by Chris Hooper, who scored 15 points off the bench after only coming away with six points in his last two contests combined.

“We just didn’t come out aggressive enough,” Hooper said in regards to the loss. “We wanted to win of course, they came out aggressive, they punched first, we didn’t punch back, and that was the result.”

Terrier point guard Yunus Hopkinson finished the game with 13 points and a team-high five assists. Forward Antonio Jenifer added 12 points and eight rebounds, while guard Jon Doss came off the bench and dropped 10 points, including a 3-for-5 (60%) display from beyond the arc.

“I don’t know, that’s college basketball,” Hopkinson said. “Some nights are your night, and some nights they’re not. We’ve just got to keep looking forward. They were just tougher than us today, more physical than us, and it effected us offensively.”

In the game, the Blackbirds finished with an efficient (48.3%) shooting from the floor, and a big part of their offensive success came from the foul line, where they made 22-of-25 free throws (88.0%). The Blackbirds also only turned the ball over seven times, half as many as the Terriers did, 14.

The Terriers also struggled mightily from the three-point line, shooting 6-of-25 (24.0%) from behind the line, and coach Braica acknowledged that he would like the his boys to get inside more.

“I don’t want it (three-point shooting) to be our identity, we need to get the ball in the paint more, we’ve gotten away from that,” he said. “We’ve got to get back to getting the ball inside, playing inside out, and the ball needs to move more.”

The Terriers will have their chance to get right back in the win column on Thursday night at Robert Morris. The game will take place at 7 p.m. on NEC Front Row.