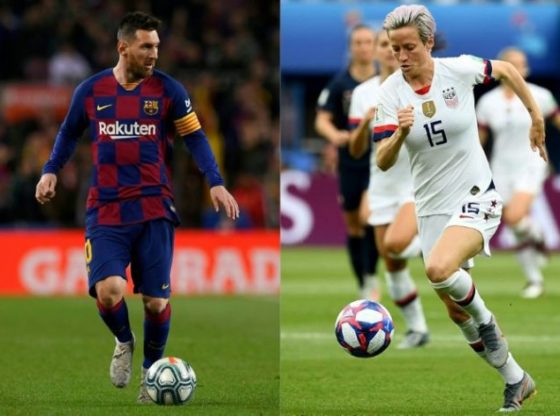 Every year in December, journalists from all over the world are called to reward the best player of the previous soccer season, both men and women, with the prestigious “Ballon d’Or.”

Even if you are not an expert and hate soccer, you probably know how two guys called Cristiano Ronaldo and Lionel Messi look like.

The reason is simple. For more than ten years, the “Ballon d’Or” and every other kind of individual reward has been characterized by an exhausting alternation between the two of them.

Two different views of seeing soccer, one more pragmatic and concrete, the other more artistic and philosophical, but both of them recognized as spectacular, with good reasons.

Last year something unusual happened: neither Messi nor Ronaldo, but the Croatian midfielder Luka Modric won the “Ballon d’Or”, interrupting a rigid dichotomy that had been going on for exactly ten years.

In 2018 Modric won the Champions League with his team, the “Galacticos” Real Madrid, and reached the World Cup finals with his national team. Two significant achievements, in which Modric played a vital role.

This year things seemed similar. There were always Messi and Ronaldo, but the new entry was Virgil Van Dijk.

The Dutch defender was one the main protagonists in Liverpool’s triumph in Champions League and reached the “Nations League” final with his national team.

In particular, Liverpool played a fantastic season. With Jurgen Klopp on the bench, The “Reds” did something incredible coming back from a 0-3 against Barcelona with a 4-0 in their stadium, Anfield Road, in Champions League semifinals.

Many expected a recognizing for Van Dijk. As the French magazine “L’Equipe” titled: “A red carpet for the “Reds”.

But here is the problem, extraordinary is ordinary for them.

How can you define as “ordinary” the season of Leo Messi, when he scored 45 goals with Barcelona winning the “Liga” (the top league in Spain) and being top scorer in Champions League?

You can’t and, in fact, Messi won again. For the sixth time in his career.

What more could Van Dijk do? Probably nothing.

It’s not easy for a defender to win these kind of prizes, which tend to reward striking technical gestures, rather than something less showy like good tackles or right defensive moves.

In fact, only three defenders won the “Ballon d’Or”.

One of them is Franz Beckenbauer, who revolutionized the interpretation of this role and won two in 1972 and 1976.

Another German player, Mathias Sammer, won in 1996 while the last defender to receive the “Ballon d’Or” was the captain of the Italian national team Fabio Cannavaro, in 2006, when Italy won the World Cup.

However, I think the assignment of the “Ballon d’Or” still has its own logic, not necessarily linked to Messi’s undeniable technique.

It’s something more profound and hidden, and it has to do with the best definition that was given about Messi by the Spanish opinionist Ramon Besa, for the newspaper “El Pais”

“Messi is the sublimation of a collective way of intending soccer.”

There have been years where other Barcelona players, like Iniesta or Xavi, may have deserved to be recognized as best players of the year, but Messi always won.

This strong connection between the team and the individual, that never overlaps but compensate each other is the secret of Messi and Barcelona’s success in recent years.

It may be repetitive, and sometimes it would be better to recognize other stories, other triumphs, but the one of Messi is undeniably great.

Among women, there weren’t many doubts, and the “Ballon d’Or” went deservedly to the striker Megan Rapinoe, winger of the USA World Cup-winning team and top scorer of the competition together with her teammate Alex Morgan.

It was a magic year for the purple-haired Rapinoe, that not only captured attention for her phenomenal playing but also for her strong political views, which resulted in a clash with US President Trump.

But didn’t step back and went on, with her head held up high and arms extended wide, celebrating the umpteenth goal.