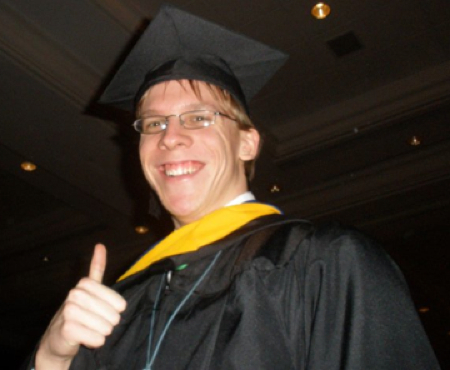 Matt Linkus graduated from St. Francis College in May 2010 and has already earned himself a position as one of SFC’s adjunct physics professors.

Professor Linkus currently teaches two sections of physics lab to a total of 38 students on Tuesdays and Thursdays. On Mondays and Wednesdays he also tutors mathematics and physics in the Academic Enhancement Center on the third floor.

When he was a student he had trouble deciding whether to major in chemistry or mathematics. Linkus said: “I chose the latter and picked up minors in IT and Communications along the way.”

When asked what he wanted to accomplish with that major Linkus shrugged and said: “The lack of an ultimate goal was part of the problem when I was choosing between two majors. While I certainly do have a love of mathematics, the truth is that I didn’t know what I wanted to with it when I chose it as my major. I’ve graduated and I still don’t.”

While ‘an ultimate goal’ still remains unearthed, the journey along the way for Matt should prove to be a valuable one. Professor Linkus said, “While I was a student at SFC, I worked as a Student Assistant for Leah Kovenat in the science labs for three years. As the summer was ending, Dr. Wolfe, the chair of the Chemistry and Physics Department, told Leah that someone was needed to teach the two sections of Physics Lab. Leah mentioned that I was a recent graduate and former employee with a degree in Mathematics who had done well. Shortly thereafter, I received a phone call from my old boss who put Dr. Wolfe on the line. At that point, I was just supposed to be tutoring in the Academic Enhancement Center. Soon, though, I had an interview in just a couple of days and was on my way to becoming an Adjunct Professor.”

As a recent graduate, Linkus has a better understanding of his students because he was in their position not too long ago. Linkus said: “Yes, I think that it’s certainly helped. I am very familiar with the course and the lab equipment since I had spent three years working in the lab and was just in the course last year. When I am tutoring, it also helps that I’m very familiar with all of the material since it was taught to me recently by the same teachers that I had.”

Looking towards the future, Linkus said: “As I’ve mentioned before, I don’t know what I ultimately want to end up doing for a career. The truth is that I cannot support myself with the job I have right now, but I am gaining valuable experience. Right now, I only see myself as a professor for a short while, but it is something I would consider returning to. However, one generally needs to have a doctorate in order to succeed as a professor. Unless I can find a better job, I hope to go to graduate school in the Fall of 2011.”