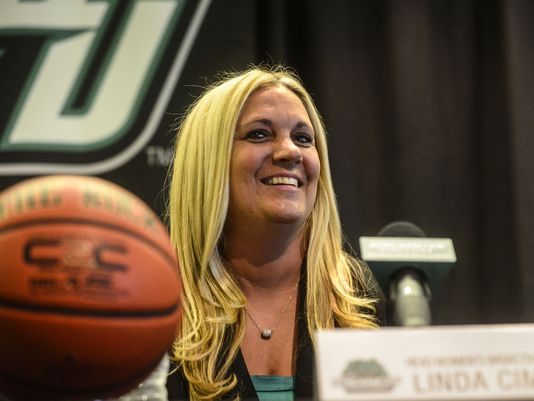 Garcia said: “We could not have asked for a better individual to lead our Women’s Basketball Program, Linda embodies so many of the values we pride ourselves in here at St. Francis College.

“We are excited to see her continue the high standard of excellence Coach Thurston and his staff brought to our Women’s Basketball program.

“Her commitment to encourage female athletes to succeed on the court and in the classroom, as well as her mentoring of each player to become well-rounded members of their communities are what we most look forward to as she joins our Terrier community.

“Linda’s success on the court will continue to be evident through her deeply rooted understanding of our Franciscan Mission of hospitality and fulfilling one’s life purpose.

“We are excited to have her join our St. Francis College Family and cannot wait for this next chapter of Terrier Women’s Basketball.”

Cimino comes to St. Francis from Binghamton University where her leadership style, positive energy, and work ethic helped change the culture and reignite a sense of pride and energy at the university.

In the last three seasons Cimino’s leadership has helped the Binghamton Bearcats to average 15+ wins and play at or above .500 in conference play each year.

Cimino was named the America East coach of the year in 2016 after making Binghamton amongst the most improved teams in the NCAA.

In their most recent season the Bearcats finished with 20 wins for the first time since the school moved up to Division I in 2001.

Cimino is no stranger to the Tri-State Area and is excited to make her return to New York City.

Cimino said: “I am thrilled to come back to the NYC metro area, a place where I have spent most of my career and to work under the leadership of Irma Garcia, a person who has been a mentor to me.

“I fully embrace the Franciscan mission of St. Francis College as I am deeply connected to my faith and look forward to developing strong, well-rounded leaders who will serve from their hearts.

“I’m eager to bring my personality and style of play to Brooklyn and continue to build upon the success of this program.”

Cimino played a significant role in her rebuilding the Cougar program and in only her second year with Caldwell, her team was recognized as one of the most improved teams in the country.

In 2010-11, Cimino led the Cougars to their most successful season in the program’s history. She guided the program to the most wins in their history (21), broke the mark for win percentage (.778), made the program’s first appearance in the national rankings and won the Central Athletic Collegiate Conference (CACC) Regular Season Championship.

St. Francis College President Miguel Martinez-Saenz said: “Having someone of Linda’s caliber as a proven competitor on the court join our family is an incredible advantage for the Women’s Basketball Program and entire St. Francis College Community.”

Prof. Dugan’s new book and “learning for the sake of learning”
Abanobe’s Ambitions