LIN-SANITY CONTINUES IN THE BIG APPLE 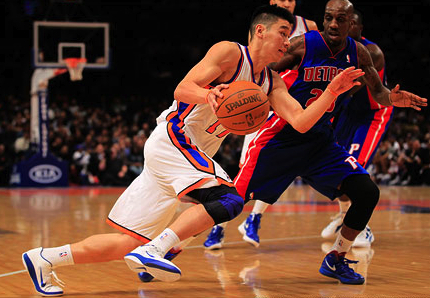 “Lin-sanity” continued wednesday night as Jeremy Lin and the Knicks took down the Sacramento Kings 100-85. jeremy-

The blowout win gave the Knicks an opportunity to rest several players after playing seven games in 11 days.

On Tuesday, Lin delivered a clutch three-point shot with a half-second left that put New York over the Toronto Raptors on the road. Lin exploded for a game-high 27 points and 11 assists. It was also, it was the first game back for Amare’ Stoudemire, who scored 21 points and grabbed nine boards after missing the previous four games due to the passing of his late older brother, Hazell.

Lin has become a national star. “Lin-sanity” is sweeping the nation taking over Toronto, Canada for one night, receiving a ruckus ovation from the crowd as the game ended as if it were a Knicks home game. The undrafted Harvard product was cut on Dec. 9 by the Golden State Warriors in a salary cap move to try to sign DeAndre Jordan (Jordan ultimately signed with the Los Angeles Clippers.) Two weeks later, Lin’s new team, the Houston Rockets, released him to order to sign Samuel Dalembert.

New York picked up Lin on Dec. 27 and immediately assigned him to the team’s Developmental League affiliate, the Erie Bayhawks, to gain experience. After impressive play, Lin was called up by the Knicks who were in desperate need of a point guard.

The Knicks were struggling up to this point losing eight of their last 10 games putting to rest the high expectations this team demanded after signing Tyson Chandler and the story surrounding Year 2 of Carmelo Anthony and Stoudemire as teammates. In desperate need of a win, Lin delivered a career high 25 points and 7 assists in a reserve role as the Knicks outlasted the Nets 99-92. In the game, Lin outdueled All-Star point guard Deron Williams. Knicks head coach Mike D’antoni recognized the game that Lin provides inserted him into the starting lineup for the next game for the recent future, an experiment at best.

What followed in the upcoming games was remarkable and has caught the attention of the NBA and basketball fans worldwide. The Knicks have won a season-high seven consecutive games and brought their record to 15-15. During the streak, Lin has averaged 24.4 points and 9.1 assists per game including an outburst of 38 points outdueling Kobe Bryant of the Los Angeles Lakers.

Since D’a=Antoni has given Lin the keys to the point guards duties, he has responded and the Knicks are suddenly back in contention for the postseason. After using the amnesty clause to release incumbent point guard Chauncey Billups, D’Antoni struggled to find a suitable replace, relying on shooting guard Toney Douglas and rookie Iman Shumpert to man the position, but none have delivered like Lin.

The success the Knicks are having with Lin as their point guard is well deserving. In fear of being released by a third team this season, Lin, a Harvard graduate, slept on a couch in his brother’s apartment in New York until he moved out earlier this week. He’s also a Christian and thanks God every chance he gets for this opportunity.

Almost as shocking as the emergence of Lin is that New York has gone one a seven game winning streak without Anthony. The three-time All-Star was injured during the game against the Nets and has been sidelined with a strained groin.

“It’s kind of easy, put the ball in his hands, a guy who can run a pick and roll offense” said Anthony to Knicks.com following Tuesdays practice. “Maybe our transition game gets better, there are so many oppurtunities that Im looking forward too returning to the basketball court, I couldn’t be in a more blessed situation right now.”

With Lin’s emergence Baron Davis will probably not be the starter even when he makes his debut as a Knick. Lin has gotten tired at the end of games and Davis’ return will help as he will be the backup point guard giving Lin time to rest in key stretches during games.

Adding Davis back as a reserve and Lin’s emergence as the starter will give the Knicks a strong backcourt to go along with Douglas and Shumpert. Mike Bibby, who was signed as a free agent this offseason, seems to be the outcast of the guards and probably will not return to the team next season.

Knick games recently have become a hot ticket as prices have risen astronomically to 60% due to the teams sudden success. According to ESPN, ticket prices for the Knicks game against the Miami Heat on Feb. 23 has risen by $100.

After a slow start to the season, it looks like the Knicks are back.