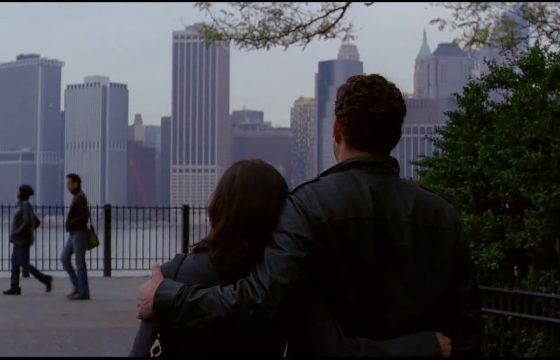 Even in the background, St. Francis College has been a leading player in the camera’s eye.

New York City and its five boroughs are no stranger to film and television production, going so far as to make a flourishing industry openly advertised by the Mayoral Office, “Made in NY”.

SFC has seen much action in its 150 years, and just as many “cuts.”

Robert Oliva, SFC’s Director of Community Partnerships & Special Events spoke with SFC Today to discuss the extensive history of SFC in the Movies.

CC: As the Director of Special Events, how do you participate in planning productions?

RO: The neighborhood of Brooklyn Heights is very “film-friendly.” The local community is very open, with film companies coming into the neighborhood and making film productions from commercials to television shows to major motion pictures.

[Reason] Number One: It is a revenue source when a different film companies use a school or government building, such as Borough Hall or the Courts, or even stores.

They get revenue, and we bring them in. The more revenue we bring in from filming on-campus to different crew activities, such as holding; remember that there are extra actors; some films have even 200 extra actors, and they [the film company] need someplace to put them. So they call St. Francis, and ask us: “Do you have someplace where I can hold 200 people to have them wait when they’re not in the scene, where we can do catering, wardrobe, and makeup?”

That’s what SFC does; we use spaces like the Callahan Center, Cafeteria, and Genovesi Center to accommodate the companies’ needs and all the revenue raised helps the college with its operating expenses, which ultimately aids the students on campus.

Secondly, I think that the students get really enthusiastic when different shows and films are recorded on campus. Several years ago, we had Gossip Girl; they filmed here twice.

We had a NY Lottery commercial film outside a few years ago, a bunch of television shows, such as scientific shows from National Geographic, in addition to the Discovery Channel…

This weekend, Delivery Man (Universal) comes out. Last fall, they filmed in the pool and Callahan Center, so make sure to check out all of these films, and you’ll be surprised whether or not you recognize SFC: because when they come in, they transform the space…you may not even know you’re in SFC. But when they’re done, they restore the rooms and have everything look better than what it was before.

CC: Throughout Your Career, how many productions have you supervised?

RO: I haven’t overseen any of the productions, but what myself and my staff (Joseph Acciarito and David Loufti) do is help in the coordination of the film on campus. So, I believe over the past four years, that a good approximation of holdings we’ve had is about 12.

We’ve had 3 TV Shows, 2 Movies, several commercials and still photo shoots. I would say, all in all, in four years we’ve had around 20-25 film-type productions, either housed through holding or filmed on campus, and we hope to bring in more.

Remember, it’s tough for these companies to come in during the semester, because there is so much going on with classes, activities, community events, and athletics…So the summertime is the big time where we invite these companies and scouting crews to scout the space and see if it can be used for filming.

Also during December and January, the Intersession Period, that’s when we really attract these people to come in. The way people know about us is via word of mouth, as well as how we gain a good reputation, because we’re quite “film-friendly,” and people like to come to the college.

That’s one way, and the second is that we advertise; on the website, we let people know that we do rent space on campus, and we’re in a publication known as NY411, and it is the Bible for filming in New York City; we’re listed as a source and provider of locations.

CC: Have You Ever Participated As An Actor?

RO: Well, I wish; that would be a great experience. Unfortunately, with most of the films and productions that take place, you have to be a member of a certain trade [namely the Screen Actor’s Guild]…So, myself and my staff haven’t had the opportunity to, but with every scout that comes in, we try to ask, “You know, if you need any extras, we’ve got 3,000 students in the building and 600 employees! We’d be your ‘captive audience!'”

They never really took us on that offer, but it would be nice to see students like you appear in these films because, you know what: it would be a very memorable experience and that’s what we try to do at St. Francis.

We try to make memorable experiences for every single person that comes through these doors. And by bringing films in, we hope to create those experiences.

The students that were here and saw Vince Vaughn last year, they’re going to be talking about that for the rest of their lives. And that’s what it’s all about.