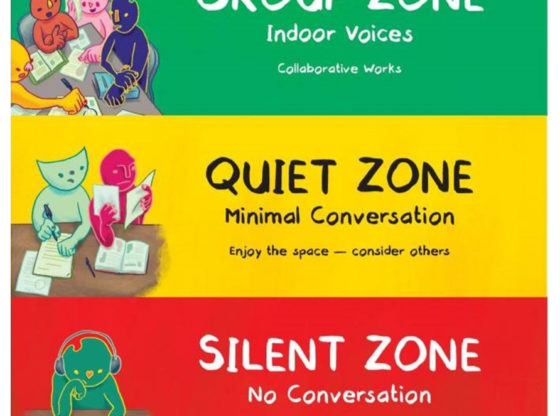 The St. Francis library has taken a spin on the childhood game Red Light Green Light. But instead of racing across a floor, they’re giving the students the chance to study within the newly enforced noise zones while using those very zones to police each other.

In response to these complaints, the director of library services, Mona Wasserman, got to work with her team. On Jan. 23, 2020, the beginning of the spring 2020 semester, an email was sent out encouraging students to be aware of and know their new library noise level zones.

“Some students believe that a library should be completely silent, which is just unrealistic,” Wasserman said, “That’s just not the way an academic library operates.” She further explained that in the past, there were far fewer study groups, which therefore influence student conversations, in turn, elevating the noise level.

“We’re really trying our hardest to accommodate everybody’s learning style,” Wasserman said. As such, she and her team decided to implement three noise level zones, to satisfy the student needs, while controlling the noise levels. Wasserman has worked at St. Francis since 2008, and she said this is the first time she has seen any initiative of this sort implemented.

There are three zones: green or group zone; yellow or quiet zone; and red or silent zone.

The green or group zones are located upon entrance to the second and cellar floors of the library. They allow for free conversations and collaborative work. Within this zone, there are large tables which make it easy to host study groups as the furniture can be arranged.

The yellow or quiet zones are located by the enclosed computer rooms on the second and cellar floors of the library, and closer to the back. It permits minimal conversations with the consideration of others.

The red or silent zones, which bases on its name suggests no talking, is located at the extreme back of the library’s cellar. Because it’s at the back, it makes for the perfect spot for the silent zone as the numerous rows of bookshelves and walls absorb the noise for the other zones.

“So far, I think it’s helped,” Wasserman said of the zones, but there are always hiccups. Although the system gives students the opportunity to appreciate their space while respecting others’, there are certain groups of students that are excessively noisy. But the disruptive students typically become quiet when the security guards walk through the library.

Students say the zones are making a difference.

Sophomore Jonathon Lowe said that the louder students have moved into the green zones, reducing the distractions for students in the yellow and red zones who really want to study without noise.

Sophomore Laik Green said that he doesn’t think the zones have made much of a difference. He added that in some cases, students already understood that the library had different noise level areas and acted accordingly.

“It’s a work in progress, and I’m always willing to listen,” Wasserman said. “This is our first try.”

If we’re wrong as to how large each zone should be, we can adjust,” she added.:

Romello back in action
Cultural awareness