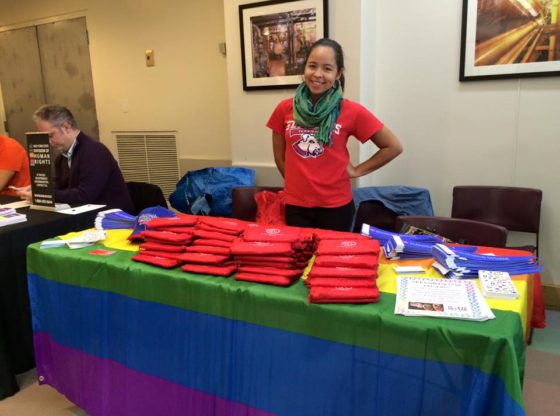 St Francis College’s LGBTQ club — which formed at the beginning of the academic year — is thriving, having hosted many meaningful events with many more to come.

This accepting basis has been integral to the important relationship between the club and the school, the junior added.

Faculty moderator Michele Montecalvo described the club as groundbreaking. Despite the idea of an LGBTQ club being mentioned for the past couple of decades, it was never started until recently because students and faculty were concerned or afraid. However, students this year were not afraid to stand up for themselves and their identities.

The club is small and young, but it makes up for that in what they have been able to accomplish.

The club had the opportunity to host The Brooklyn LGBTQ Youth Summit at the college in November. At the summit, there were workshops, tables, and the ability to network with other members of the LGBTQ community. The club, in negotiation with the school, was also successful in establishing gender neutral bathrooms for that whole day.

During that same month, the LGBTQ Club welcomed two firefighters from the “It Gets Better” campaign to talk about their stories as well as how it’s like being openly gay in the FDNY. Similarly, in expanding the amount of reassuring and open role models, two SFC faculty members visited one of the club’s meetings to share their experiences.

“They had nothing but positive information to share,” Rodriguez said.

Besides being active hosting community events at the college, the club has engaged with the student body by hosting a bake sale and Jeopardy tournament. The distinction of the Jeopardy event was that all of the trivia was LGBTQ related.

Rodriguez wants the student body to know that the club is not just for people who identify as LGBTQ. It is a place for everyone to feel accepted as they are. Allies of the LGBTQ community are always welcome to join meetings, regardless of race, age, gender, religion, or sexual orientation.

BROOKLYN BALLET IS BACK
STUDENT GETAWAYS