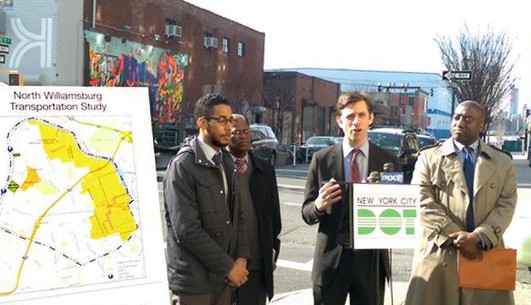 The city will perform a study in North Williamsburg and Greenpoint to assess the additional travel needs of the area, the NYC Department of Transportation and Councilman Stephen Levin announced this week.

The city will gather data on street safety, public transportation, accessibility, congestion, travel times and parking starting this month. The goal of the study is to find ways to decrease congestion and increase mobility in the two Brooklyn neighborhoods with limited public transit.

“The DOT is excited to embark on a study that will inform how New Yorkers move around in North Williamsburg for years to come,” DOT Brooklyn Borough Commissioner Keith Bray said in a statement.

The only subway lines in the vicinity are the L and G. In addition, G trains do not travel to Manhattan. There is a Manhattan-bound ferry that departs from North 6th Street and several bus routes, but both can take up a lot of time.

“Residents have been asking for this kind of study for years,” Levin said in a statement. “This neighborhood has changed in recent years and our approach to congestion and mobility needs to evolve with it for us to meet the needs of everyone in the community.”

The two neighborhoods – less than four square miles combined – have more than 100,000 residents, according to a 2010 census, as well as many commercial properties and industry.

Local residents will also have the opportunity to participate in at least three public meetings, which will be held after to study milestones.

“This analysis must lead to concrete action to improve transportation access in an area where infrastructure is straining under increased development,” Brooklyn Borough President Eric Adams said.

Adams also encouraged the DOT to do the same study in other Brooklyn neighborhoods with transportation challenges.

Data will be collected until the summer and recommendations for improvements are expected to be released by fall 2017.