LEO LIONS TAKE PRIDE IN GIVING BACK AT SFC

Home /News/LEO LIONS TAKE PRIDE IN GIVING BACK AT SFC 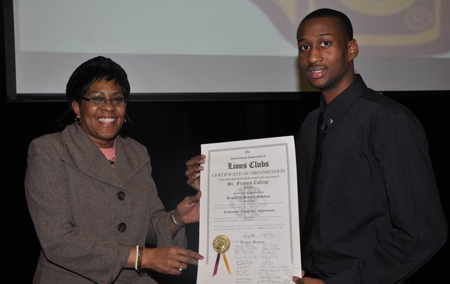 L is for leadership. E is for experience. O is for opportunity. There was once a time when I was uninvolved and would either go home or hang out with friends but with this outlook I would never be able to understand my true potential. Then I joined the Leo Club…and the rest is history.

The Story of how the SFC Leo club began started in VCB (Visions Camp for the blind) during the summer of 2010.While working at the camp SFC students David Bryant ,Jessica Rios , Patrick Shaw, and George Mckee often thought about what they could do to make a difference. Dion Jones, a member of Lions International, worked at the camp as well.

After working at VCB for some time David Bryant eventually saw the leos that volunteered there and how well they worked. Creating the SFC Leo Club was an opportunity for Bryant to create a new club at St. Francis College.

Bryant stated: “There`s a lack of spirit with students. It`s as if they come and then they go. I want to get people involved with something that can help build their character but also build their resume.“

Realizing that some students just go to school and go home or that they don’t carry the spirit that students in a university would he decided that it was time to make a drastic change to the SFC students everyday lives.

David Bryant is a man on a mission. He is career focused and self-determined for something bigger than himself. The SFC Leo club is filled with bright and talented young people who are willing to give their time and effort…

They want to make a difference not only for themselves but for the people who aren’t as fortunate to have what they have such as money, strong relationships, or a home.

SFC`s Leo Club may have recently started but it is the largest club in St. Francis College’s history, having 40+ members in just under one month. Members strongly believe in community service. Bryant stated: “A degree of selflessness, that`s what a lot of people don’t have.”

The Leo club participated in the Brooklyn Borough President’s food distribution located at Borough Hall – downtown Brooklyn. Food was distributed to the families and churches for thanksgiving.

This was sponsored by Wholesale Foods, and Best of Brooklyn Inc., created by Brooklyn`s Borough President Marty Markowitz. Markowitz expressed his thankfulness towards the Leo club for making this event possible every year. There were stacks many turkeys , vegetables , and fruits for families and churches who were going to need help for thanksgiving.

On December 11, 2010, Borough President’s Holiday celebration occurred at the Christian Cultural Center. The Leo club showed support by giving out books and toys to children for the holidays.

On December 20, 2010, SFC`s Leo club arrived at their Feed the Homeless Event to help out at a venue that didnt have many workers. On a regular day the staff would only consist of three permanent members while the rest of the people came on a volunteer basis. The presence of the Leo club made that day an enriching experience as over 200 people were served in a short time amount of time.

A lion is an SFC student who is trying to make a difference in the world. Recently inducted into the Lion`s Club international SFC`s own Leo Club has done so much in such a short amount of time that they have even gained support from Brooklyn’s own President Marty Markowitz, also a lion`s member.

On the day of their induction he signed over a billed that would give Leo Members at St. Francis College a day to remember by making January 21, 2011 St. Francis Leo Day . Students in the Leo Club have had the opportunity to volunteer, gain strong friendships, and a chance to help those in need.

HAVE A PRETTY FORTUNE
PEDICURE NIGHTMARE:”IT’S A REAL NAIL BITER”