LE TIGRE ON TOUR ONCE MORE 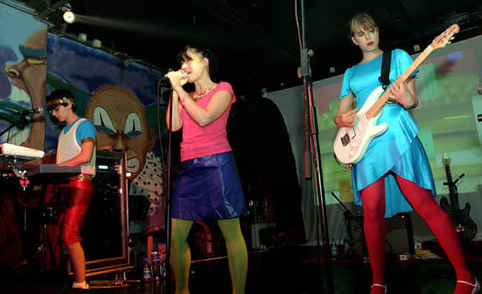 The director of the film, Kerthy Fix and band member Johanna Fateman also hosted the screening. The film chronicles 5 years of Le Tigre on tour all around the world.

Le Tigre was fronted by Kathleen Hanna, Johanna Fateman, and JD Samson (endearingly known as “the dyke with the moustache”) from Berkeley, California. They each achieved much recognition around the world for their innovative electronic sound, and subversive lyrics. The sounds and lyrics deal with issues of feminism and the Gay Lesbian Bisexual Transgender community.

Le Tigre began when 3 girls started meeting in Berkeley. A growing punk scene was building in the area, but they noticed a lack of women in these punk bands. Slowly but surely Riotgrrl movement began. This was an underground feminist punk movement which included vehement activists against sexism, female disempowerment, and sexual abuse. Popular bands such as Bikini Kill (which Kathleen Hanna fronted), Huggy Bear, Sleater-Kinney, and Bratmobile used their music to relay their message.

A few years later Le Tigre was formed. They received a lot of attention for their distinct sound. The band itself also gained much attention for its subversive lyrics and anti-sexist views. However, as they became more popular, they received backlash from their early followers. Kathleen Hanna and JD Samson recalled the pressure of the double-edged sword for women in music. They were “either sellouts, or sluts.”

As they gained more recognition, they were given many endorsement opportunities. Jane Magazine wished to run a full page spread on the band’s new album. The band wanted the ad to include “feminist lesbian” trio to be advertised, but the editors rejected the idea. The editors were worried that the head of the department would frown upon the word lesbian.

In the end, they decided to pull the ad to protest how lesbians and feminists tend to threaten people.

The film took an inside look at this wave of feminism and the backlash it received from society. In the words of Johanna Fateman, “In the 90’s it wasn’t cool to be a feminist.” Feminism today, has a hot issue that draws much debate. Le Tigre’s audience kept the “fire burning on feminist issues,” said Kerthy Fix.

The band faced a lot of horizontal oppression as they tried to celebrate the legacy of feminists before them. Sometimes coined “feminazis” they had much difficulty dealing with the sexism of their generation.

The screening included the film and a Q&A session with Kerthy and Johanna. The audience asked many interesting questions and Kerthy and Johanna were more than happy to answer the questions. When asked if she saw Le Tigre’s influence in music today, Johanna modestly said, “I loved what we did, but it was just part of the cultural moment in time.” She stressed the possible need for another wave of feminism, because the flame sometimes seems to be dwindling.

While the band is no longer together, they feel that they did what they needed to convey their message to society. The three women remain close friends as they continue in their own ventures. Johanna Fateman co-owns Seagull Salon in the West Village, JD Samson is working on a solo project called “MEN,” and Kathleen Hanna is married and working on a new album for her solo project, “Julie Ruin.”

If you are interested in seeing this documentary, there will be another screening held at the Museum of Modern Art on April 4th in conjunction with the exhibition Looking at Music 3.0. There will also be another Q&A session featuring Kerthy Fix, Johanna Fateman, and Kathleen Hanna.