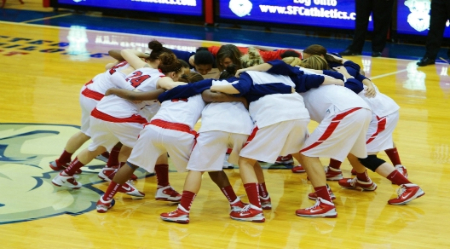 After finishing the season in the cellar of the Northeastern Conference with a 2-27 record, head coach Brenda Milano is looking forward to a rebound season in 2011-12 with a revamped team.

Milano said: “The new kids that came in this season are much more serious.” She is entering her 10th season as head coach. Overall, St. Francis will have a team that features eight freshman, no seniors and only two juniors.

Despite the young team, the Lady Terriers are able to bring experience to the table. Out of the five returning players, four of them started at least 10 games last season, including captains Jasmin Robinson, Stephanie Bingham and Kim Snauwaert.

Along with their familiarity with Milano’s offense, the returning players have also helped the newcomers get used to college life in general.

Milano said: “The four returning players are familiar with our system and with such a young team they have taken the freshman under their wings to adjust to the college life.”

Along with the hard-work-attitude of the new players, the upperclassmen have also stepped their game up. Robinson, the only sophomore who was named team captain, spent the summer working on her jump shot.

Milano said: “The team is getting better every day.” “As long as we’re consistent we will surprise a lot of teams this year.”

Robinson and Milano both said that their goal this year was to make the post-season, but Robinson also said she had one other goal in mind.

Along with the leadership of the upperclassmen, Milano also mentioned how some freshmen have stepped up.

Milano said: “Katie Fox does a great job of leading by example.”

Among the eight freshmen entering the season, Milano pointed out forward Jessica Kaufman as the player to look out for this season. The 5’11” Australian native was the South East Australian Basketball League D-League MVP of her team, the Sabres, in 2009.

The Lady Terriers open the 2011-12 season on November 13th on the road against UPenn. Tip-off is scheduled at 2 p.m.