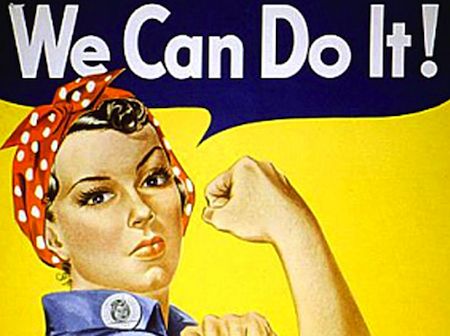 We can say that every woman’s experience in college is different, and we can all surely agree that the best experiences are the ones that we create for ourselves.

YES WE CAN -Women should follow their dreams while still in college
Whether you notice it or not St. Francis is full of young women creating their own opportunities and actively seeking to make their own college experiences not the prelude to their careers, but the very beginning.
Everyone speaks about ‘after college’, weighing the possible opportunities, hoping for jobs and imagining success, but not very many people stop to think about the real worth of the time spent in college.

At the beginning of this semester (my last as a junior) I couldn’t say that I felt thoroughly wretched about the four months that lay ahead of me, but I couldn’t deny the heavy trickle of enormous dread and anxiety rolling down my spine at the thought of being a volunteer slave to my own future.

However, euphoria quickly came with the realization of my future being just that: mine.

The editor-in-chief of SFC Today, Sade Falebita, said to me “your career starts in college, but people fail to look at it that way”. This was a jolt in all the right places, even for me, self- proclaimed “Queen of Plans”. The only thing is, my plan consisted of taking a deep breath and staying under until it was all over.

Ladies, an above average GPA is not enough anymore, we must meaningfully add to our college curriculum.

One impressive female is Yande Paye, a junior and senator of the Student Government Association (SGA) here at SFC. Originally from Senegal, Yande moved to the United States in 1995 and adapted herself to life in a whole new country. This 20- year old woman is the President and founder of the African Culture Club at St. Francis College.

Awe struck, I asked immediately about how a student establishes an official club in a college? Yande single handedly resurrected the African Culture club out of her own passion and initiative by making a proposal to the Director of Student Activities.

The 2010- 2011 speaker of SACOR, the Student Activities Council of Representatives, Cindy Luz Hernandez, is only a sophomore but she has already acquired priceless experience in managing any number of people within any given club or group.

Cindy is double majoring in Biology and Psychology, and is responsible for moderating all club and organization activities within the college. The SACOR speaker admitted that it is all hard work but “you only have four years, you must make the most of it”.

The resume of Ayisola Johnson is already inspiring enough to motivate anyone.

As a senior majoring in Criminal Justice with a minor in Women’s Studies, she is one of the founding mothers of the sorority Epsilon Sigma Phi Delta Chapter, President of the Step Team, a member of the Caribbean Students Association (CSA), and Speaker of the African Culture Club. Focus is an understatement.

I hope that we gals here at SFC can attempt to mimic each other’s best qualities and therefore discover our own.