Kiwi with the killer touch in water polo

Home /Sports/Kiwi with the killer touch in water polo 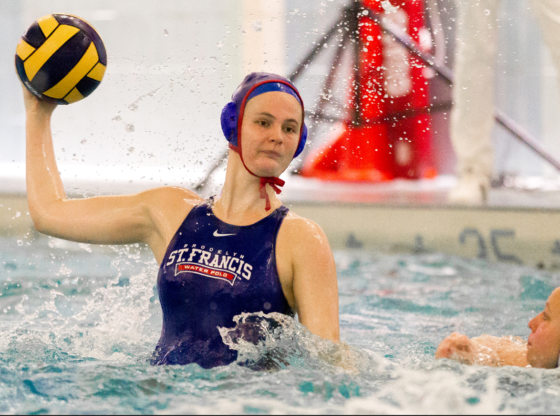 St. Francis College women’s water polo freshman Kelsey Snelgar is making headlines as she comes to the end of a very successful first season as a Terrier.

Snelgar comes to St. Francis College from Auckland New Zealand and has been a tremendous addition to the team under head coach Megan Husak.

When asked why she chose St. Francis College, Snelgar said: “I wanted to keep playing water polo, so at first I was looking at schools in California.

“My coach back home got in touch with [St. Francis College head coach] Megan though. Once they started talking, I applied and got accepted here.

“This was really the only school in New York that I’ve considered. I wanted to come to the city and play water polo, and this hit the spot.”

She said: “It’s nice to be recognized. But water polo is not an individual sport. I’m not here to be a player of the week – I’m here to help my team.”

Snelgar has led the team to big victories this year, including a 20-11 victory over Connecticut College where she scored half of the team’s goals that day.

In addition to numerous MAAC honors, Snelgar has become the first Terrier to score 100 goals in a single-season.

Snelgar hit the century mark in the first quarter of the team’s final game of the season against Wagner.

She went on to score three more goals that game completing her first season with 103 goals.

The New Zealand native is just the seventh player in MAAC history to accomplish the feat. She also set a new single-season school mark with 103 steals.

Chief librarians to retire
Prof. Steven on having the best of both worlds