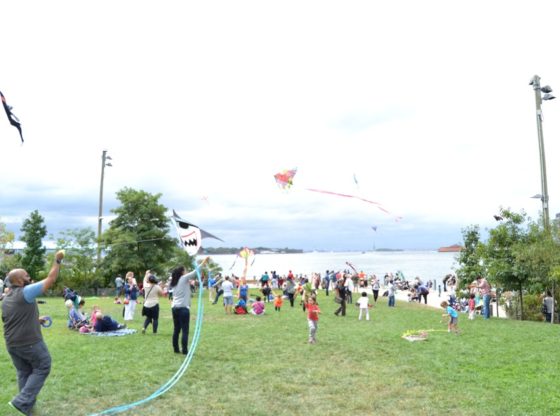 Children and adults of all ages flew kites above the East River for the 4th annual Brooklyn Kite Festival at Brooklyn Bridge Park on Saturday, September 13.

The four-hour festival, which is organized by Brooklyn mom Angie Chait and the Parks Department each year, welcomed residents to fly their kites on Pier 1 of the park. Kites were sold for those who did not have their own.

“It’s a good time,” said Michael Foronda, 41, who flew a kite with his six-year-old son Oliver. “We’ve been coming ever since it started.”

Chait explained how the participants share and help each other every year.

“People share here. If you can’t get your kite up, then people help you,” she said.

Michael Kanner, 37, who was with his children Rex, 3, and Madison, 1, highlighted how friendly the other attendees were.

“It’s great. Kids get to meet each other and play together. It’s about as Brooklyn as you can get,” Kanner said.

Chait said she loves seeing families having fun together at the end recalled a father who was running around with his children, flying a kite at last year’s festival.

“It actually brought me tears. It reminded me of why we do it,” Chait said.

Chait came up with the idea when she brought her ten-month-old son to a kite fest outside of Brooklyn.

“He loved it and I thought, okay, we need to have one in Brooklyn,” Chait said. “I just thought it would start as a small community event and it wound up not being that small.”

There were about 1,500 participants the first year, more than 2,000 the second year, and over 3,500 at last year’s festival. Chait advertised less this year because she didn’t want it to be overcrowded.

Chait will meet with the Parks Department next month to discuss the changes that need to be made for next year’s festival and will immediately begin planning for it.

Chait thinks events like this are what make Brooklyn a good place for children to live.

“Brooklyn is a great place to be a kid,” she said. “There are a lot of wonderful events for kids. I feel like the more we do events like this, the more people will want to stay in Brooklyn and raise their kids.”