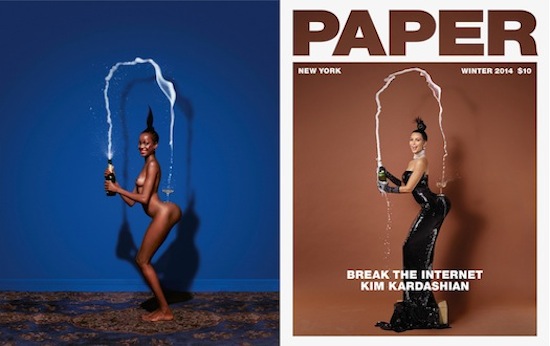 Kim Kardashian may think that she is “breaking the internet”, but in reality she is just reinforcing an old stereotype.

Some criticized the fact she is married and a mother, who should show her daughter a better example of what it means to be a woman. Others think that this is just the latest of her attention seeking events, beginning with a sex tape with Hollywood bad boy Ray J.

In one of the photos, Kardashian is featured in an otherwise elegant sequenced black dress, pearl choker necklace, black gloves, and an up do, standing on top of a pedestal. She is holding an open Champaign bottle which is flowing over her head like an arch and into a Champaign glass perched on top of her famously fake butt.

Now usually I would not care much about stuff like this, but her shenanigans have gone too far, and beyond that, upon first seeing the photos, I could not help but recall the photo of Sarah Baartman.

Baartman was a former slave, turned freak show attraction, lured by promises of money by British Doctor William Dunlop in the 1800’s where she was exhibited all over Europe as the “Hottentot Venus”.

These “shows” featured Baartman and her “unusually large” buttocks and genitals. In an attempt to show their superiority over others, particularly blacks, her European handlers used Baartman’s physical characteristics, (not unusual for South African, Khoisan women) as “evidence” of this prejudice.

She was treated like a freak exhibit, even being put in a cage alongside a baby rhinoceros. She was often fully naked or wearing only a loin cloth. People paid to touch and do as they pleased with her.

In her final years, she was studied by French anatomists and zoologists, and was seen as the link between humans and animals. When she died at the age of 26, a plaster cast of her body was made, her brain, and genitals were also pickled and preserved in jars, which were placed on display at the Musée del’Homme (Museum of Man) until 1974.

Although the subject in todays “Hottentot” is a happy and willing participant, the idea behind it is still the same, to shame and sexualize the characteristic of having a voluptuous body, and a big butt.

Today some people consider Kardashians photos to be a work of art. Do not be fooled. This is not art, by any stretch of the imagination.

What it is, is a new white washed more glorified version of an older piece by famed photographer Jean-Paul Goude entitled “Carolina Beaumont” which features a model of African descent, in the same pose, with her hair in a ponytail. However, she is not on top of pedestal, or wearing pearls, or a sequenced dress, or wearing anything at all for that matter.

Both photos feature women wearing a smile, holding a Champaign bottle with a glass on top of their backsides. This imagery is the epitome of an overtly sexualized depiction of the female body.

The “Carolina Beaumont” shows a more primitive, poor, black, servant like version of the Kardashian photo, calling into question Goude’s motives for depicting the woman of African decedent in an inferior view and depicting the Armenian American in a glamorized superior view.

In Venus in the Dark: Blackness and Beauty in Popular Culture, author Janell Hobson discusses how Goude often depicts the black female body as highly exaggerated, comical, and grotesque.

In describing Carolina Beaumont, Hobson says, “The subject wears an ‘exotic’ hairstyle and ‘smiles’ for the camera in the pose of a ‘happy savage pleased to serve’ which suggests her complicity in having her body depicted as a literal object, a ‘primitive’ vision to provide pornographic pleasure and intoxication presumably for a white male spectator.”

The exact opposite can be said about the Kardashian photo, which shows a woman equipped for life in the lap of luxury, who serves no one, and is happy in her ignorance, living a life which includes no struggle.

The only similarity is the presumption that this will serve as pornographic pleasure for men, thus severely distorting his perception of a voluptuous woman as someone who is there for his pleasure alone.

Both Goude photos speak to the issue of race and the western depiction of black women, big butt’s (fake or real), and a big butt being an attribute of the stereotypical over sexualized woman of color.

Whether or not you think this depiction of voluminous women effects you, it does. It is pictures like this which are viewed not only on the pages of play boy or penthouse, but on the main stream media circuit that reaches a broad variety of people and allows men to over sexualize, cat call, and view women with the “hour glass shape” as attention seeking harlots that thrive off of their unwanted attention. That is simply not the case.