KICKING OFF An Inaugural Season 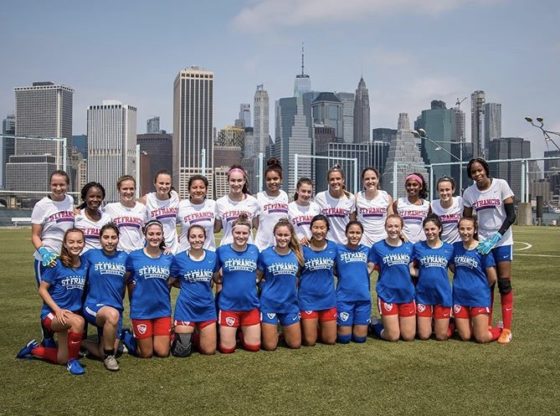 It’s only one week until history will is made for St. Francis College. On August 22nd, the St.Francis College Women’s Soccer team will take the field for the very first time in program history.

This historic announcement took place on June 24th, 2018. With the addition of Women’s Soccer, the St. Francis Brooklyn Terriers claimed their 21st NCAA Division I team.

“There are a significant number of youth and High School female soccer players in New York City,” said St. Francis College President Miguel Martinez-Saenz. “The amount of competitive leagues and youth programs makes this a great opportunity for us to provide yet another competitive NCAA Division I Women’s Soccer program right here in New York City.”

Lombardi served as the assistant coach of the women’s soccer team at Quinnipiac University for six seasons and was a player for University between 2006-09. During her time there as a coach, she helped the Bobcats reach the MAAC semifinals during the 2018 season, and she helped them earn their best season in program history during  the 2016 season (12-7-1, 7-4 MAAC).

“We are thrilled to announce the addition of Justine Lombardi to our family here at St. Francis Brooklyn,” stated Irma Garcia. “Justine brings a pedigree of winning and a tremendous work ethic to our program, which is set to hit the field in the fall of 2019.”

In terms of recruiting, Coach Lombardi and SFC Athletics announced their first three signees to the new squad in early November of 2018 (Eva Papista, Hannah Russel, and Trystan Thompson-Cotterell).

Coach Lombardi has faith in these three incoming freshmen as she believes that they can set the foundation for the team.

“Hannah, Trystan, and Eva are great players, but more importantly they are great individuals that are going to contribute so much to this program over the next four years and beyond. They are just the people that you want to go to battle with, and I couldn’t be happier with this first group to sign,” said Lombardi in an interview.

Along the way, Coach Lombardi recruited multiple players to complete their 21-player roster. Two out of the 21 signed players on the roster, Sarah Dewitt (Defender, Sophomore, LIU transfer) and Caroline Debonis (Grad. Student, defender, QU transfer) were named captains of the team.

The St. Francis Women’s Soccer team will kick off their regular season next Thursday as they will go up against Lafayette College at the Brooklyn Bridge Park- Pier 5 at 2:00 pm.

Hopefully they will kick off the season with a bang.