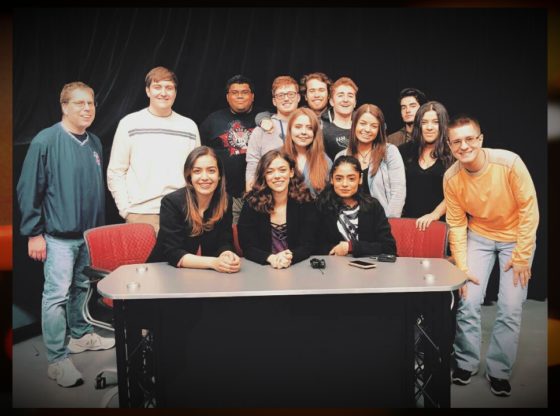 Mathew Panico and Kevin Kowalik are new and aspiring juniors at St Francis College with just enough experience and guidance to push them in the new school year. After becoming members of Terrier TV, they became friends and shared some learning moments. I spoke to them on their experiences so far during the last two years.

What is your major/concentration and career goals?

Panico: I am a Communications major with a concentration in Digital Media. I am focusing on becoming a Director, Producer or technical director for one of the major news networks in New York.

Kowalik: The major/concentration that I am focusing on right now is Communication Arts with a focus in Performance Studies and Broadcasting. My career path at first was to be involved in acting and learn more about performing arts. After thinking this through, to be part of the acting experience, you would have to be really talented to be noticed by well-known agencies and production companies. Someone that has started a little late being involved in acting at the age of 15 would’ve got me nowhere it all came down to this as I look back at my childhood to become a movie director. It was because my dad had a video camera he used for so many years to record home movies. It got to my attention as soon as I used my father’s camera for the first time at 9 years old, my dream was to be a film director. But as months went to years, my perspective changed; and I moved into acting. Since acting would be a big competition for many young people, I moved away from that and got involved in news broadcasting to become a news anchor.

How did you get involved in Terrier TV? What about SFC inspired you to get into the club?

Panico: I got involved into Terrier TV with my friend Mike. We are both part of the Terrier Sports Network (TSN) which does a lot of production work for the D1 sports teams at SFC. We learn a lot there, but we wanted to find more opportunities to get involved in the production aspect of TV and the Communications Department as a whole. What inspired me to join the club was the way SFC makes you feel like you’re a part of a family. I felt that I could have fun and learn from my classmates in the club.

Kowalik: I got involved in Terrier TV through a flyer that was on the bulletin board on the second floor that was looking for new members to be involved on set, on camera and the audio room. As soon as I found out about the first meeting Terrier TV was holding and just by looking at the room that was something I’ve dreamed of for a long time that I was going to work with cameras. Even though I am also a member of the Troupers, I wanted to gain more experience; so I joined Terrier TV because it had a lot to do with what I am currently studying.

What have you learned so far during your time at Terrier TV?

Panico: After joining the Terrier TV club I have learned the value of teamwork and what it means to manage multiple people. I am often in a management role in the club during productions. During these times, I have learned communication and proper management skills.

Kowalik: Being a member of Terrier TV, I have learned everything from responsibility, compassion, and respect. The equipment that Terrier TV owes is preparing you for the outside world in case you’re involved in fields such as digital media or news broadcasting. I would want to carry out those techniques to teach the next generation of learners.

What’s your favorite funny moment being on Terrier TV or in SFC in general?

Panico: To be honest with you, I don’t have a favorite funny moment while attending SFC.

Kowalik: I don’t have a funny moment that I can recall having right now, but a word of advice. Being part of Terrier TV gives you the chance to learn new things, communicate with other members of the club based on what made them join, and ask questions for the ones that have been there for a long time who experts of are now their major.

What are you excited to learn this fall (in class or in the club)?

Panico: I’m really excited to learn how to use Adobe Premiere this fall. I feel that my video editing class will truly teach me a lot of valuable skills that I would need to work in the industry.

Kowalik: Since I am taking Television Studio Production right now, I’m willing to gain experience in positions that I have never maintained before so when I complete the course; later in the semester, I will feel confident on helping the next generation of Communication Arts majors.

Has there been a mentor, professor, or friend you’ve looked up to at SFC?

Panico: So far, Senior Matt Fanizza has been both a mentor and friend here at SFC for me. As president of the Terrier Sports Network, he has taught me a lot about the digital media field by taking me under his wing and has helped me feel welcomed at SFC. I don’t know where I would be today without his guidance.

Kowalik: I’ve looked up to Professor Gewirtz as a great role model. Even though he has been involved with Terrier TV and all the classes he teaches, he is a person that will help out with any problem you might have and he finds a way to turn the negative into a positive. With those kinds of methods, we want SFC to be an environment where everyone can get along and have that kind of positive energy throughout the school day.

What advice would you give to incoming freshmen, and what would you tell them about the club?

Panico: I would honestly tell freshman to get involved and be yourself. It’s important to get involved and follow your interests. Not only is it the best way to figure out a future career path, but it’s a great way to make new friends. I would tell them that Terrier TV is a great place to make new friends and have fun. Even if you’re not looking for a career in TV, it’s very fun and you’ll learn a lot.

Kowalik: Take responsibility for your own actions, focus on your academics and find a name for yourself on campus. Be involved more, be creative and if you want to learn more about Terrier TV, we’ll guide you through on all the equipment, talk about our personal experiences (our strengths and weaknesses) how we first learned about the club, and as the semesters go by, we can make the club a better place for people to join.