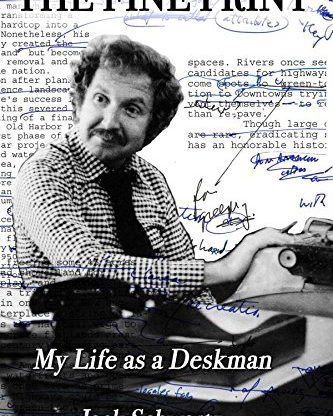 Today veteran journalist Jack Schwartz visited SFC to read excerpts from his book “The Fine Print: My Life as a Deskman,” a nostalgic look-back at Schwartz’ rise from fledgling and fresh-faced copy boy to his days as an editor at the zenith of urban press, the New York Times.

Schwartz has had his finger on the pulse of the New York news cycle for decades. He has personally witnessed the information revolution that changed newspaper offices from typewriter-filled hubs of ink to digital powerhouses whose readers want their information by the second.

News outlets today, Schwartz said, “are twittering, gawking, and buzzing into the future. I realized I was a fossil,” he continued, a remnant of an era that proved “much closer to Guggenheim than to Google.”

As is to be expected, Schwartz has a rich way with words, padding each sentence with pointed adjectives so the reader—or listener, in this case—is transported into the charged atmosphere of the New York City newsrooms of yesteryear.

Very little changed from the 1600s to when Schwartz began his career in journalism in the 1950s, he noted. Articles were still physically printed and cut by hand, and Schwartz reminisced about the days that he would leave his office at the Times with the first edition of the paper splattered across his shirt.

When he retired in 2005, though, the scene he painted was quite different. “Everything changed,” he said. His book chronicles those times before today’s technology infiltrated the age-old news writing process, “The nitty gritty of what actually happened in a newsroom.”

Schwartz then painted a colorful picture of the New York City of the 1970s and 1980s, a lore that millennials have only seen pictures of. The heyday of print news suddenly came to life as Schwartz described the daily grind of getting the news to the people.

He described the crisis of the 1965 Northeast blackout, and crises such as these, Schwartz contended, make or break newspapers. He used a phrase that certainly echoes with the editors of SFC Today, calling the newsroom “a controlled chaos harnessed to a single purpose—get the paper out.”

He was also front and center for the provocative investigation into the Pentagon Papers, which he recounted in another anecdote from his book. The Pentagon Papers were a groundbreaking series of documents that chronicled US political and military involvement in Vietnam, and in a landmark First Amendment decision by the Supreme Court, the New York Times was given the right to publish them.

Schwartz had a front seat to the incredible changes in technology and process that journalism underwent in the latter half of the 20th and early 21st centuries. “When I left the Times, there were no more printers,” Schwartz said, “Typewriters were a thing of the past. One person at a keyboard could do the work of 12.”

Throughout his experience as a New York City journalist and editor, though, several critical points remained the same. “There’s basics of reporting, of interviewing, of trying to get at the truth, of trying to get your facts straight. And that, that won’t change.”

“I think technology is critical,” Schwartz continued, “But there are basics. And those basics will be true whether you’re dealing with hot type, cold type, digital, or anything. […] Getting your facts straight, getting it right, being fair, and being balanced, that’s important, and that won’t go away.”

Schwartz delved into the disappearing world of print journalism from the unique perspective of a man who had the news of the world in his hands. It was his responsibility to disseminate said information to the masses, and equipped with ink and some typewriters, he and his coworkers did just that. They were the final actors and participants of an art as old as time, and of a mythical process whose death has quietly come and gone.

READY TO POP SOME TAGS?
THE KING OF STREET FAIRS RETURNS TO BROOKLYN