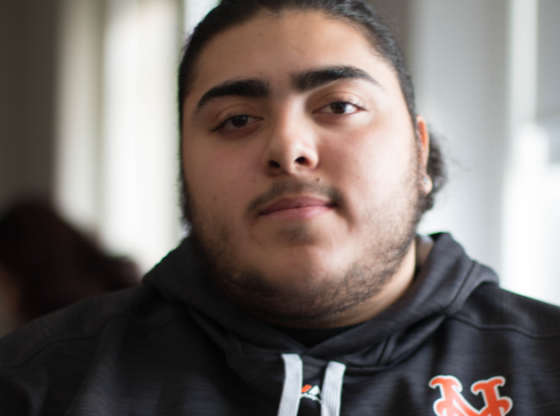 Sitting behind a mic wasn’t in the picture for Joel Otero.

He had his mind set on getting his barber’s license after highschool and making a career out of giving buzz cuts and fades, possibly even opening up his own shop.

But with a push from his parents, the Brooklyn native who is now a Queens resident decided to explore his (then) hobby of DJing at St. Francis College by majoring in Communications.

Little did he know he’d unlock a new passion for radio through SFC’s Radio Club, where, as President, he hustles to establish the Radio Club as a media outlet for students.

What kind of responsibilities do you have as President?

Right now since we don’t got a lot of people, I’m answering emails, doing trainings, running meetings, all the good stuff. Putting up shows, making sure they go up, making sure people are recording … basically everything that the station is doing right now is basically me and Nick (Arias).

He’s a junior right now so we’re like shaping him out so when I graduate, he’s good. We’re grooming him.

What do you find most enjoyable about either being president, having your own show or just being involved with the Radio Club?

I love having a show. Just to talk sh*t on, basically. Um, also I like just running stuff, like being able to tell people “yo, you gotta record today like what’s up.”

But also, this whole radio stuff … to be honest … there was a time where it was just talk and nothing was happening.

And then in the back of my mind, I was like “yo this looks good on a resume.

Then we finally got like the mics, the board, the laptop, we started finally putting up shows …

And then in the back of my head again, I was like nah now it’s not even for a resume, it’s about leaving a legacy, so I could be like oh yeah SFC Radio yeah I started that ….

You get what I mean? That’s what’s important to me. As long as when I graduate, the website’s good, the shows are up, and it’s doing good … I’m good.

What do you think was the biggest reason why SFC Radio didn’t initially jump off?

It was a lot of writing proposals to try and get money to buy the stuff and then … it was just like oh but who is gonna really listen to a radio station.

So we really had to like try to persuade them that it’s a good idea and (that) people are gonna listen.

Hopefully people will listen. That’s what I think held it back. Cause we were all trying our best, writing proposals, talking to professors trying to get their backing, but yeah, I think that’s what held us back.

What’s the hardest thing about working at SFC Radio?

The funding and trying to get people interested. As you know radio is a bit on the decline so everyone’s like why would I be on the radio?

So when I’m at like all these events and I’m trying to introduce it to people, I try to make it look real attractive to them so they’re like “you know what, I’ll join.”

Right now, all I’m worried about is getting people trained and putting shows up, and then, I feel like if we put shows up and we get everything down, the website, we get a set schedule, the listeners will come. They’ll come in time …

You said one of your favorite parts of being in SFC Radio was running your own show. What show do you run?

Yes. *laughs* So I got a Hip-Hop show that I just play old school Hip-Hop, I do it with Professor Gregory. I have a show with Manny (Vilmatelo) that we don’t know if we’re gonna put out yet we’re doing a couple of test episodes, and then we’ll see what happens.

And then I have a wrestling show with Nick (Arias) where we just review what happened that week or we’ll decide a topic for the week and we’ll just discuss it. I just love talking sh*t, and I love to give my opinion on stuff and I don’t care what people think.

Where do you view the position of radio in the entertainment industry?

Radio right now is on the decline. But I also feel it’s because of our generation. Like we’re listen to people on Hot 97 that are 40 (year olds) talking about what’s going on. Like if it was somebody like you or me talking on Hot 97 maybe they would have the millennial listeners, you know what I mean?

I think podcasts are taking over … that’s basically what we have on the station right now, just a whole bunch of podcasts, just in time slots.

There’s no transitioning or giving commercials, like we go live but like it’s usually just talk shows that we have right now and like we have some music but it’s not to the point that you can be like, thats a radio show.

It’s more of that’s a podcast cause we’ll play the music give you a backstory on it, or like news news, stuff like that. You know what I mean?

That’s why I think podcasts are taking over. Radio is gonna … hopefully not go under cause I need a job *laughs* but that’s what it’s looking like. But also then it’s like, aight, I’ll podcast then. That’s what I’m doing now.

Do you think if radio had more young people’s involvement it’ll have the potential to stay alive? Or would you say it’s inevitable?

Nah, I think it’ll stay alive. I think they just need a balance. You need a old head in there once in a while, you know what I mean?

So you think there’s hope?

Yeah. They just gotta—I feel like New York is the only place where radio isn’t big, and that’s because like we’re always on the move. We never really in a car, we usually on the train, you know what I mean? Like you usually just got earbuds in and you’re either listening to music or a podcast.

What do you hope to accomplish with the experience of SFC Radio under your belt?

I hope to get on the radio one day. Even if I don’t get a show, or anything, try and get at least in the business. Maybe be like station manager, help out with anything they need, because like ive done alot of stuff here. So hopefully that’s what it turns out to be.

Jamel Brinkley, one lucky man
A look into the future of women’s soccer with head coach Justine Lombardi