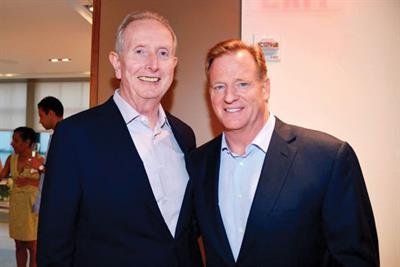 The NFL’s longest serving employee used to walk the halls of St. Francis College and was classmates with SFC President Brendan J. Dugan.

Joe Browne will leave the NFL at the end of this month after 51 years with the company.

After working on the Communications and Public Affairs team for many years, and eventually being promoted to Executive Vice President of the department in 2002, Browne transitioned and became NFL Commissioner Roger Goodell’s senior advisor in 2010.

“The EVP job was 24/7/365 and at that point in 2010 I wanted to take a step back,” the 1968 SFC alumni told SFC Today. “Commissioner Goodell was very understanding in helping me make the transition.”

Browne has been focusing more on the company’s 20,000 plus retirees and promoting their success stories for the past six years. While serving his previous post, he did overseas work and was the chief liaison for the league’s 32 clubs for congressional, military, and other government-related matters in Washington D.C. at times.

In the 51 years he has spent with the company, Browne is most proud of how much the Super Bowl has changed.

“I have been part of the organization which has helped make the Super Bowl the number one sporting event in North America and an unofficial holiday in the States,” Browne said.

Since 1965, the Super Bowl has grown from one weekend in Los Angeles to an entire year of planning for NFL employees.

“I have been fortunate to have attended the last 49 Super Bowls,” he told SFC Today.

The company had only 11 full-time employees when he first joined, but now has 1,100 worldwide.

“I can’t swear I know all of them by first name,” Browne said.

Browne is often asked how he was able to spend more than 50 years in a high-stress environment and he responds by explaining that no two days are the same.

“Working for the NFL Commissioner’s office is not the same as working in the DMV office,” he said. “There are new challenges and issues nearly every day.”

The fact that Browne has only had three Commissioners who were all easy to work with has also made his job enjoyable.

“They all were tremendous leaders and understood the importance of stability,” Browne told SFC Today.

He found the opportunity during his freshman year at SFC when one of his friend’s from Queens asked if he was interested in working with him at the NFL, clipping NFL stories out of the 50 plus daily New York City newspapers.

He was working in two different supermarkets at the time and decided he would take on the NFL job on Saturdays. It quickly turned into a part-time internship and he was able to leave the supermarkets.

Browne continued working at the NFL after college, despite his stint with the U.S. Marine Corps.

He joined the Marine Corps Reserve Unit in Brooklyn after graduation and spent nine weeks training on Parris Island, South Carolina. Those nine weeks helped him mature more than at any other point in his life and also helped him lose a significant amount of weight.

What Browne found most appealing about SFC was how convenient it was for New York City residents.

“St. Francis was — and is — a great commuter school,” he said. “By that I mean, I was able to live in my family’s house in Queens, take the subway to Remsen Street each day, travel to the city to work at the NFL offices and then go home at night. It was a heckuva triangle.”

As an English major, analyzing literature in his classes prepared him for his career at the NFL.

“Those studies, particularly the Shakespeare courses, helped me when I was arguing the merits of Instant Replay with some of our critics,” Browne told SFC Today.

During his time at SFC, he was a P.A. announcer for the home basketball games and wrote a one-page update on the team each week. He left a stack on a chair near the doors at the 180 Remsen Street entrance.

“It was a sophisticated distribution mechanism,” he joked.

Browne is also grateful to have met lifelong friends at the college, including President Dugan, who he graduated with in 1968.

Students at SFC should utilize their access to the companies in Downtown Brooklyn and Manhattan and do an internship before graduating, Browne said.

“I learned a great deal just by listening to businessmen talk on the elevators when I was a college intern at the NFL,” Browne said. “I also saw how my bosses handled situations and spoke to other business people in person and on the phone. You don’t get that experience when you are in a college in some beautiful, but isolated area of the country.”

Before coming to SFC, Browne was the first basketball scholarship recipient at Archbishop Molloy High School in Briarwood, Queens.

His coach was the legendary Jack Curran who became a father-figure for him since his father died when he was seven.

“Coach definitely had a positive influence on me,” Browne said.

They played Power Memorial Catholic High School and Browne had difficulty going up against Lewis Alcindor — aka Kareem Abdul Jabbar, who was on the team.

“I tell whoever listens that Lewis and I ‘share’ the New York record for most blocked shots in a game in that he once blocked 12 of my shots,” Browne said.

After leaving the company, Browne will remain in New York and continue to work in sports, politics and entertainment through his own company.

His reason for leaving is the same as former Broncos quarterback Peyton Manning’s reason for recently retiring from football — he just knows it’s his time to leave, Browne explained.

“I will miss my NFL colleagues. I will miss representing the most well-run and well-respected sports organization in the world,” he said. “But I look forward to new challenges as I turn the page to the Second Chapter of my career.”