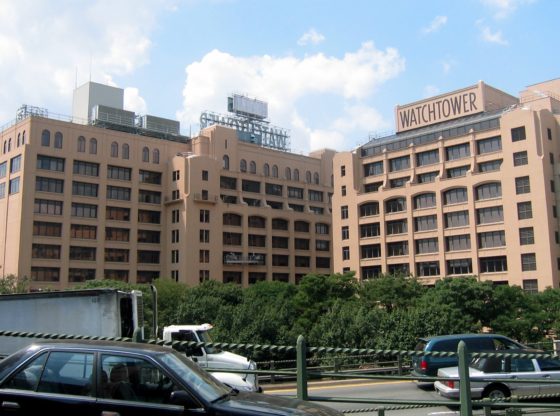 The Jehovah’s Witnesses are selling their famous headquarters building in Brooklyn Heights for more than $1 billion, ending more than 100 years of Brooklyn-based operations.

The sale likely heralds the end of the famous Watchtower sign which sits atop the massive building and has long adorned the Brooklyn skyline. Advertising the Witnesses flagship magazine, the sign is visible from Manhattan and especially conspicuous to Brooklyn-bound drivers as they cross the Brooklyn Bridge.

Founded in the 1870’s by Charles Taze Russell, the Jehovah’s Witnesses — known for their door-to-door proselytizing — arrived in Brooklyn in 1909. It was the idea of the group’s founder to combine a house of worship with a corporate and printing facility. Over the next hundred years the religious group amassed 36 buildings scattered throughout Brooklyn, among them their massive headquarters, purchased in 1969.

It is partly for this reason that the organization’s headquarters is being moved to Warwick, a town in upstate New York.

“As we’ve grown as an organization we’ve had to buy scattered properties wherever we could find them,” Witnesses spokesmen Richard Devine said according to the Associated Press. “With a big, scattered campus like that it’s challenging to administer and to maintain.”

In addition, the change of location is apparently popular among some of the religious group’s members.

“To be honest with you, many people find New York City intimidating,” Devine said according to the Associated Press.

Local residents welcomed the move — which will make hundreds of thousands of square feet available for apartments and business interests.

“It’s going to be incredibly transformative,” Alexandria Sica, executive director of the DUMBO Improvement District, said according to the Associated Press.

The sale will make hundreds of thousands of square feet available for apartments and business interests and local residents welcomed the move.

Scia also echoed the sentiments of Witness members by pointing out the apparent cultural differences between the Witness complex and the local neighborhood, which has become increasingly trendy. She stated that the property always seemed closed off from Brooklyn Heights and was not welcoming.

INDIE COFFEE SHOP THRIVES IN SUNSET PARK
HENSON, SEAHAWKS TOO MUCH FOR TERRIERS IN 83-59 WIN