IVERSON NEEDS SOMEONE TO LEAN ON

Home /Sports/IVERSON NEEDS SOMEONE TO LEAN ON 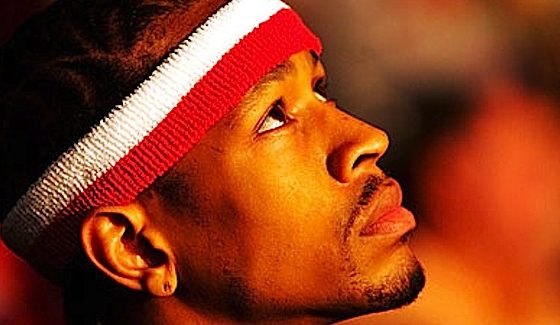 Allen Iverson had been named the NBA’s Most Valuable Player in 2000-01, becoming the first Sixers player to win the award since Moses Malone in 1982-83, but, all of Iverson’s hard work and accomplishments are being ruined by his bout with alcoholism.

Iverson is one of only four players in NBA history to lead the league in scoring at least four times. Iverson has given his heart and soul to the NBA, but now the all-star is facing some trouble.

His closest confidant asked the basketball world to pray for Allen Iverson, as if no one in all of these years hasn’t see this trainwreck coming. Iverson’s friend acted as if the former 76ers star didn’t need a significant dose of prayer and divine intervention until now.

Just listening to Gary Moore, Iverson’s business manager, and the person he trusts most, they may be doing something to help Iverson very soon. Allen Iverson is in trouble folks, deep trouble. The combination of alcohol and gambling and a once promising career is in turmoil.

If numerous NBA sources are telling the truth – and there’s no reason to believe they’d do otherwise in a situation of this magnitude – Iverson will either drink himself into oblivion or gamble his life away.

Iverson’s wife, Tawanna, has hired an attorney and filed for divorce last week. By no means are her actions helping the matter; nor does it help that she’s already separated from her husband, with custody of their five kids, and seeking both alimony and child support.

The one advantage Iverson acknowledged having all of these years was a wife whom he publicly said, “I’d die for her. . . I’d die without her.”

Now, Tawanna responded by saying, “Go right ahead.” Take the more than $200 million he has earned in his career, subtract Uncle Sam’s portion, alimony, child support for five kids, and no money flow, then ask yourself what the 6-foot guard has left? Nothing.

Consider Iverson’s well-known penchant for alcohol and being banned from casinos in Detroit and Atlantic City – if disgust and sadness doesn’t come to mind, at least one question does: Where is the person with the ideal combination of compassion and toughness who would shelter Iverson at the same time he’s holding his feet to the flames?

Someone whose vested interest is in Iverson’s well-being, someone who doesn’t need his money or cachet. “I think there’s one guy, and his name is John Thompson,” said former Temple basketball coach John Chaney, noted for saving souls as much as winning basketball games throughout his illustrious career.

John is the one guy who’ll have a chance of slowing Iverson’s path-to-destruction down, someone who could wrap his arms around Iverson and have an impact, because clearly it has not been done.

But there’s still this one question: Will Iverson listen? As a big supporter of Allen Iverson and long time fan I hope so, not just so Iverson can relish as a superstar basketball player once agin, but, for his well-being as a person. It breaks my heart to hear him suffering like this.

As fan, I really don’t like to admit it but with his work ethic as a player, his out-of-control lifestyle, mistakes, and lack of preparation for a life beyond the glory, I kind of saw this nightmare coming and just thought I would wake up after it all happened.

Iverson had a God-given amount of talent, which got him so far in his career; even with his limited size he still dominated the land of the giants, which will still to this day be remarkable. Iverson was one of the best to ever grace the hardwood floors. He was fast, tough and deadly from inside and out. He took a mediocre 76ers team to the NBA Finals on his back, and by himself willed them to one gritty. Hopefully, with friends that care enough about him, he’ll be able to get his life back on track.